Haryana, who were in command by the end of Day Three, were unable to bundle their opposition Jammu & Kashmir on Day Four.

Haryana, who were in command by the end of Day Three, were unable to bundle their opposition Jammu & Kashmir on Day Four. Asked to follow-on Jammu and Kashmir batsmen Shubham Khajuria and Pranav Gupta ensured that their side did not suffer an embarrassing loss. Jammu & Kashmir were involved in their Round 6, Group C tie in the Ranji Trophy 2016-17 at Cuttack. Jammu and Kashmir were out for 262 runs in their first innings showcased a better show with the bat the second time around, as Khajuria and Pranav added 165 runs for the second wicket to deny Haryana any inroads. FULL Cricket Updates: Ranji Trophy 2016-17, Day 4, Round 6

Khajuria also had a 72 run stand with Umar Nissar, who departed making 38 runs. Pranav Gupta became Mohit Sharma’s second wicket who had also got Nissar. Pranav made a 190-ball 80, that included 4 four’s and one six. Khajuria remained unbeaten on 110* off 292 ball, that 14 four’s and one solitary six. Mohit picked up his third wicket in the form of Owais Shah for 6. 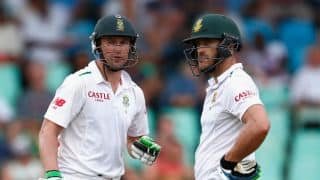 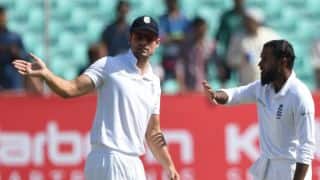