We could have batted much better than what we did and of course some of the shots which we played was not required, but ultimately Mumbai is known for that and we will comeback, said the 55-year-old Mumbai coach.

Indore: Current title holders Mumbai, who are playing their record 46th Ranji Trophy final which went underway here in Indore on Tuesday, did not quite start their bid to retain the title on a good note. The Aditya Tare-led side, which was put into bat after losing the toss, was bowled out for 228 on Day One of the game. There was some moisture in the wicket early on and Gujarat bowlers, led by RP Singh, exploited it well by bowling in the right areas. To compound the problem, few Mumbai batsmen played rash shots to throw their wicket away. Moreover, there was also a dropped catch on the very first ball of Gujarat s innings. Mumbai coach Chandrakant Pandit was optimistic of his side s comeback in the match.

Talking to the media after the day s play, Pandit admitted his side could have batted better and the shot selection was not particularly good. We could have batted much better than what we did and of course some of the shots which we played was not required, but ultimately Mumbai is known for that and we will comeback, said the 55-year-old Mumbai coach. He was referring to two dismissals in particular that of Shreyas Iyer and Suryakumar Yadav. While Iyer paid the price for coming down the wicket to chase a delivery wide outside the off stump, Yadav undid his hard work by miscuing a Chintan Gaja delivery towards mid-off to hand Hardik Patel a simple catch.

Pandit said perhaps the batsmen could have left those deliveries or could have played differently. Both these wickets cost Mumbai dearly as the defending champions lost the momentum after a brief recovery on both the occasions. While Pandit rued the shot selection, he also defended his batsmen in almost the same breath. Basically in most of the players you see in Mumbai, they like to play shots. But I think a little bit temperament is required to handle particular situations, and we failed in that.

To add salt to the injury, there were two run-outs in the innings as well. Pandit stated that there was no excuse for the same. It [run-outs] happens, part of the game. Certain things happened which we never expected, but we have to bear with that and comeback strongly.

Pandit also had words of praise for the prodigious talent Prithvi Shaw, who had scored a match-winning hundred on his First-Class debut in the semi-final and top-scored with a stroke-filled 71 on Day One of the final. He looks a very matured cricketer at this age to be honest. The way he played in the last match and again today the way he has batted, I am sure he has a very bright future, he said.

On expectations from his side on Day Two, Pandit said, Naturally we ll have to bowl them out below 200 runs and that is what we will be aiming for. We could have had 1 wicket today (Shaw dropped Samit Gohel on the first ball of Gujarat s innings) and that could have put us on top. But the first hour of the play will be crucial tomorrow. Rishabh Pant slams 84 not out in DY Patil T20 Cup 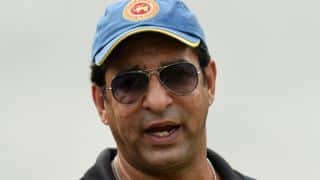