In their Ranji Trophy 2016-17 group clash against Baroda, Mumbai were reeling at 104 for 5 at one stage chasing a first-innings total of 305 to earn those 3 valuable points.

Indore: In their Ranji Trophy 2016-17 group clash against Baroda, Mumbai were reeling at 104 for 5 at one stage chasing a first-innings total of 305 to earn those 3 valuable points. Opener Akhil Herwadkar was still out there, but he needed a solid partner at the other end. In came Abhishek Nayar. He had already been in the thick of the things, having bowled 16 overs in Baroda s innings, and like it has been the case on numerous occasions, he was once again expected to bail his side out of the troubled waters. Nayar scored 38, adding 68 runs with Herwadkar and putting the innings back on track.

Though he could not go the distance himself, he got his side the momentum they needed. Others contributed down the order, and Mumbai earned their 3 points. After the match, Mumbai coach Chandrakant Pandit had said, We are happy with three points. But there are certain areas of concern, which we need to address before our next game. We cannot afford Abhishek to keep bailing us out every time. Our top-order batsmen need to take more responsibility. People who follow Mumbai and domestic cricket could not agree more with Pandit.

Cut to the Ranji final. Trailing by 100 in the first innings, Mumbai were 5 down with a lead of 170. They needed to stretch that to 300 set a commanding target for Gujarat. Wickets were falling from one end. In came Nayar, once again with the arduous task of bailing his side out waiting for him. He had been there, done that countless times before, negating even law of averages in the process. And he did it again. Nayar initially protected the tail before launching his assault. He whacked 91 off 146 balls, hitting 5 fours and 5 towering sixes (one of them so massive that they had to replace the ball), taking his team s total to 411 single-handedly.

Thanks to his knock, Mumbai have set Gujarat 312 to win. If Gujarat pull that off they will get their first ever Ranji title. Openers Priyank Panchal and Samit Gohil have given Gujarat a good start, getting 47 of those out of their way to end Day Four being unbeaten on 34 and 8 respectively. In the process Panchal went gone past Vijay Bharadwaj, taking his tally to 1,310 in the ongoing edition of the Ranji Trophy. Only VVS Laxman (1,415) and Iyer (1,321) have scored more in a single Ranji season.

Nayar, a workhorse, had earlier scored 35 in the first innings before sending down 30 overs to take 3 crucial wickets. At the end of Day Two, Mumbai skipper Aditya Tare was all praise for him. He is phenomenal. I used to think nobody is indispensable. But in terms of Abhishek, I dare not say that. His character is outstanding; the way he works for his team is phenomenal. I am so proud to have someone like him in the squad who bowls and bats his heart out for the side every time he plays.

Tare himself played a handy knock for his side on Day Four after Mumbai lost overnight batsman Suryakumar Yadav. Unbeaten on 13 at the close of play on Day Three, Tare notched up his 17th First-Class fifty before passing on the baton to Nayar. Nayar got support from Balwinder Sandhu (20) Vishal Dabholkar (12). Though the latter two did not score runs, they stuck around for long enough to allow Nayar put on 44 and 41 runs stands respectively with them for the last two wickets.

For Gujarat, Friday the 13th became one to remember for pacers RP Singh and Chintan Gaja. RP, de facto bowling captain of the side, completed his 300 First-Class wickets. Young Gaja, who was drafted in to the side in place of Man-of-the-Match in the semi-final Jasprit Bumrah, finished with 6 for 121 his maiden five-wicket haul.

Their efforts have given Gujarat an outside chance to win this game. Openers Panchal and Gohil, who have been in prolific run-making form all through the season, have added 47 runs already. They need another 265 runs on the final day to etch their names in the history of the tournament. However, if Gujarat allow their nerves get the better of them, Mumbai, with all their might and experience, may pounce on them for their 42nd title. 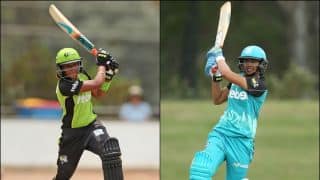