Mumbai s second innings ended on 411 in the final session of Day Four of the Ranji Trophy 2016-17 final at Holkar Stadium, Indore.

Indore: Mumbai s second innings ended on 411 in the final session of Day Four of the Ranji Trophy 2016-17 final at Holkar Stadium, Indore. They have now set Gujarat a target of 312 to win the 83rd edition of the coveted trophy. Abhishek Nayar s late burst of 91 (including 5 sixes and 5 fours), along with vital contributions from Shreyas Iyer (82), Aditya Tare (69), and Suryakumar Yadav (49), propelled Mumbai to a total over 400. Prithvi Shaw s whirlwind knock of 44 also came in handy. Gujarat had earlier taken a 100-run lead over Mumbai, scoring 328 in their first innings in reply to Mumbai s 228. They are now left with a huge task in front of them.

Mumbai got off to a flying start to their second innings on Day Three, with Shaw unleashing a flurry of boundaries to unsettle Gujarat s bowling plans. But once both Shaw and his opening partner Akhil Herwadkar were sent back the latter being first to go in quick succession, Mumbai changed their approach. Iyer and Yadav went into a defensive mode, perhaps overly so, though it had partly to do with the defensive strategy adopted by Gujarat bowlers. The two stitched a 127-run stand for the third wicket, which broke only when Iyer departed for 82.

Mumbai kept going strong even after Iyer s dismissal, as Tare joined Yadav. The pair played out for the rest of Day Three.

On Day Four, Mumbai kept losing wickets from one end at regular intervals, but Nayar held the innings together and kept runs coming. He marshalled the tail, protecting them efficiently by not falling for the bait of an open field laid by Parthiv Patel.

Towards the end of the innings, he collected quick runs by hitting fours and sixes at will, including hitting a six so massive that the ball could not be retrieved. The innings finally ended when RP Singh trapped him in front of the stumps on 91.

For Gujarat, Chintan Gaja was the pick of the bowlers with 6 for 121, his maiden five-for. RP Singh took 2 wickets as well, which took his First-Class tally to 301. Gujarat are now left with almost four sessions to get the requisite 312 runs to win their maiden Ranji Trophy title though the first-innings lead means that a draw will give them the title as well. 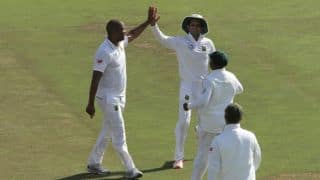