Despite fifties from Prithvi Shaw and Suryakumar Yadav, Mumbai lost four wickets in the post-lunch session to hand Gujarat an advantage on Day One of the Ranji Trophy 2016-17 final.

Indore: Despite fifties from Prithvi Shaw and Suryakumar Yadav, Mumbai lost four wickets in the post-lunch session to hand Gujarat an advantage on Day One of the Ranji Trophy 2016-17 final here in Indore. While Shaw fell in an unfortunate fashion after scoring a fine fifty, left-arm spinner Hardik Patel removed Mumbai captain Aditya Tare soon after to hand Gujarat an advantage in the game. Yadav looked in sublime touch in the second session and got to his 21st First-Class fifty. Along with Siddhesh Lad, he batted sensibly to bring Mumbai back into the contest. But a few minutes before tea, however, Yadav was dismissed to a half-hearted shot off Chintan Gaja. Mumbai had another blow when Siddhesh Lad fell at the stroke of tea, a decision Lad was not happy with, Mumbai were 179 for 6 at the break, with Abhishek Nayar, their last hope, unbeaten on 1.

There was action immediately after lunch. Yadav, in ultra-defensive mode in the pre-lunch session, stepped out and hit Hardik for six. He was a different batsman post-lunch, strokes flowing freely off his willow. There were cuts through point and elegant straight drives immediately after the play resumed. But just 9 minutes after lunch, Mumbai faced an early setback when Shaw was run out. The young prodigy was looking set for his second ton in as many career games but became victim of a mix-up with his partner and paid for it. Manpreet Juneja s throw to the keeper from cover brought curtains to his 71-run knock, which was entertaining to say the least.

Tare was the next in. Unfortunately, the Mumbai skipper failed in the big match, offering a simple catch to Rujul Bhatt in slip and handing Hardik his first wicket of the match. Mumbai were reeling at 128 for 4 at this stage. This brought Lad in the middle. Looking at the statistics this season, it was fair to say the real backbone of the Mumbai batting line-up was about to begin. Their lower-order has been the reason they had travelled thus far in the tournament, with Lad and Nayar contributing with the bat more often than not.

Yadav and Lad started the recovery by playing sensibly. Yadav brought in his 21st First-Class fifty in the meantime. The 500-odd spectators present in the ground by far the most in a Ranji Trophy game this season acknowledged his landmark. This has been the thing with matches in Indore in the recent times. During the NKP Salve Challenger Trophy a couple of years back in the city, the crowd turnout easily matched the numbers for an ODI anywhere in the country. The India vs South Africa ODI in 2015-16 had been a roaring success, while and the maiden Test between India and New Zealand in 2016 was a sell-out and perhaps played a huge role in Indore getting the rights to host the Ranji final this season.

Yadav and Lad added 41 runs for the fifth wicket. Just when they looked set for a big partnership, Yadav fell for 57 with the team score of 169. Nayar then joined Lad, who fell for 23, trying to pull a rising delivery from RP Singh down leg. The ball was away from his bat, but umpire Anil Kumar Chaudhary raised his finger after a long thought. Lad, who was visibly disappointed, did not want to leave the field. Tea was taken at this point with Mumbai s score reading 179 for 6. 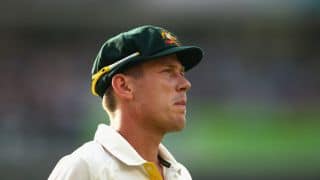 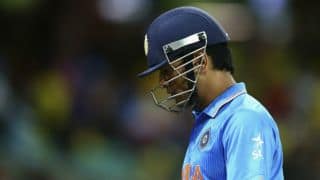