Centuries from opener Prasanth Kumar and skipper Hanuma Vihari helped Andhra to extend their lead to 206 against Tripura at stumps on Day Two of the Round 6 of Ranji Trophy 2016-17.

Centuries from opener Prasanth Kumar and skipper Hanuma Vihari helped Andhra to extend their lead to 206 against Tripura at stumps on Day Two of the Round 6 of Ranji Trophy 2016-17. The match that is being played at the Sardar Patel Stadium, Valsad, saw Tripura being bowled out for 171. For Tripura, left-arm spinner Gurinder Singh was the most successful bowler claiming two wickets. He claimed the wicket of Prasanth for 144 and later dismissed star batsman Ricky Bhui for 64. However, Gurinder was the most expensive bowler from the Tripura camp as he gave away 92 runs from his 21 overs. FULL CRICKET SCORES AND UPDATES: Ranji Trophy 2016-17, Day 2, Round 6

Andhra resumed their innings from the overnight score of 47 for 1. Prasanth and Vihari batted close to 76 overs and added 240 runs for the second wicket. Vihari, 23, was solid in his approach and remained unbeaten. In fact he batted throughout the day and crafted an unbeaten 144. The skipper, who averages in excess of 55 in First-Class, went on to add another 100 runs for the third wicket with Bhui. The return of Bhui from a shoulder surgery has boosted the Andhra batting line-up as they find themselves in a commanding position. Earlier, Andhra had won the toss and the Day One was completely dominated by Andhra pacers Vijay Kumar and C Stephen, who claimed 4 and 3 wickets respectively to bundle out Tripura for a paltry 171.

Before the start of the match, two minutes of silence was observed before the commencement of play in memory of K R Desai, founder Secretary of the Balsad District Cricket Association (BDCA).

At the moment Andhra looks set for an outright win with an innings. Before the start of this round, they were at No.3 spot in Group C and a dominating win can take them to the top spot, something they will eye. 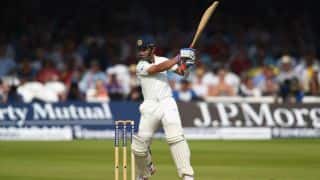