Rituraj Singh came out all guns blazing in the Ranji Trophy group C encounter against Kerala at Brabourne Stadium. He was outstanding with the ball as he steamed in and bowled with unmatched confidence. He had seven wickets to his name as he dismantled Kerala for 342 in the first innings. Goa were in command but their batsmen failed to put up a fight and were precariously placed at 169 for the loss of six wickets at Stumps on Day 2. Bhavin Thakkar, Rohan Prem played well and scored a ton each. They were unstoppable with the bat and steered their side to a commanding position. Kerala looked good for a big score but Rituraj Singh’s brilliance didn’t let them achieve fruitful results FULL Cricket Score Ranji Trophy 2016-17, Day 2, Round 6

Saurabh Bandekar also had couple of wickets to his name while Shadab Jakati had a solitary wicket in his basket. Thakkar looked good with the bat and scored 117 runs at the top before Jakati ended his run. Rohan Prem top-scored his side with 130 runs with the bat, later, Rituraj removed him with a beauty. Goa batsmen failed to put up a fight as they kept losing at regular intervals. Asnodkar looked good on 33 but Sandeep Warrier removed him. Vinod Kumar picked three wickets and helped his side to dominate the game. Goa have a huge task in hand on Day 3 as this will be a crucial day for both the teams. 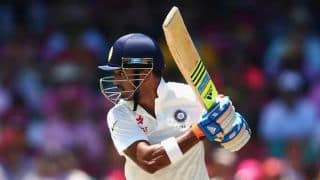 Ranji Trophy 2016-17, Day 2, Round 6, match results and highlights: Hyderabad break records to declare at 580-9 against Services