Baroda made a nervous start to their second innings, reaching 27 for no loss against Railways in the Group A match of the ongoing Ranji Trophy 2016-17.

Baroda made a nervous start to their second innings, reaching 27 for no loss against Railways in the Group A match of the ongoing Ranji Trophy 2016-17. Baroda trail by another 100 runs in their second innings, and will have to produce a much-disciplined effort with the bat to ensure that Railways do not win the game by a big margin. Railways were bowled out for a strong total of 310 runs in their first innings, which was a big score when compared to Baroda s 183 in the first innings. Railways were able to take a big lead of 127 runs. FULL CRICKET SCORES AND UPDATES: Ranji Trophy 2016-17, Day 1, Round 6

At stumps on the second day, Baroda openers Kedar Devdhar and Aditya Waghmode were leading their side s fightback. Baroda will need to bat for long in order to prevent Railways from taking any sort of initiative in the game which may hamper their position in the game. Devdhar was batting on 8 not out off 32 balls with 1 boundary, and on the other hand, Waghmode had reached 15 not out off 28 balls with 3 boundaries. This Group A match in the Ranji Trophy is being played at the Vidarbha Cricket Association Ground in Nagpur.

It was a splendid century by their opening batsman Saurabh Wakaskar that Railways were able to put up a strong total on the board. Wakaskar faced 193 balls and scored 104 with 10 boundaries and 2 sixes. On the other hand, the other Railways opener Shivakant Shukla scored 51 off 90 balls with 9 boundaries. Railways were strengthened further when their wicketkeeper Mahesh Rawat scored 72, off 79 balls with 9 boundaries and 1 six. 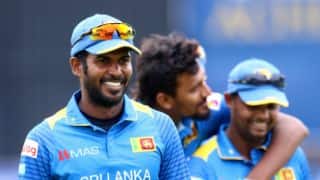