Former champions Uttar Pradesh are just 252 runs away from another win over former champions Mumbai, at stumps on Day 3 of Round 5 of the ongoing Ranji Trophy.

Former champions Uttar Pradesh are just 252 runs away from another win over former champions Mumbai, at stumps on Day 3 of Round 5 of the ongoing Ranji Trophy 2016-17, at the Srikantadatta Narasimha Raja Wadiyar Ground in Mysore on Tuesday. Earlier, Mumbai were shot out for 233, while UP were shot out for 225 in the first innings, as Mumbai fought back, but almost put up the same performance, as they were shot out for 286 in the second innings, while UP are currently 43 for the loss of a wicket, with opener Shivam Chaudhary and Samarth Singh at the crease, while Tanmay Srivastava is the only wicket to fall so far. FULL Cricket Score Ranji Trophy 2016-17, Day 3, Round 6

A brilliant 90 by inform Suryakumar Yadav and late flourish from Shardul Thakur helped Mumbai set Uttar Pardesh a target of 295 runs on day three of the Ranji Trophy match on Tuesdauy. Yadav, who missed on his century in the first innings, guided Mumbai to 286 all out, in an innings which was studded with ten boundaries and a six. Shardul made a useful 48 in 64 balls with seven boundaries and two sixes. The pair added a vital 57 run-stand for the eighth wicket. At close of play, Uttar Pradesh were 43 for one in their second innings, trailing 252 runs with nine wickets in hand, with Shivam Chaudhary and Samarth Singh were on the crease with 28 and seven runs, respectively, reports PTI.

Tanmay Srivastava, who was looking to give solid foundation or a successful run chase, fell to opening bowler Shardul for six. Resuming their score at 51 for two, Mumbai lost their overnight batsmen – Akhil Herwadkar (19) and Shreyas Iyer (18) – after adding 28 runs, added PTI. 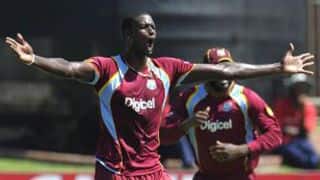