Rajasthan put up a steady performance, as the continue to trail Delhi by just 50 runs, on Day 2 of Round 7 of Ranji Trophy 2016-17.

Former champions Rajasthan put up a steady performance, as the continue to trail fellow former champions Delhi by just 50 runs, at stumps on Day 2 of Round 7 of the ongoing Ranji Trophy 2016-17, at the Krishnagiri Stadium in Wayanad, Kerala on Tuesday. Rajasthan, who were bowled out for 238 in the opening innings, bowled Delhi out for 307 in the first innings, as they are currently 19 for the loss of a wicket. Amitkumar Gautam scored 106 in the opening innings, while Delhi’s Navdeep Saini and Vikas Tokas claimed three wickets each. In the Rajasthan innings, Rishabh Pant scored 75, while Pankaj Singh, Tanveer-Ul-Haq and Mahipal Lomror claimed three wickets each. FULL Cricket Score Ranji Trophy 2016-17, Day 2, Round 7

Young Rishabh Pant’s dream season continued as he snatched the limelight from India internationals Gautam Gambhir and Shikhar Dhawan with a breathtaking 75 off 59 balls that had nine boundaries and three sixes in a Ranji Trophy encounter against Rajasthan. In reply to Rajasthan’s 238, Delhi ended their first innings at 307 taking a 69-run lead. In the second innings, Rajasthan were 19 for 1 and with two days left, the Gautam Gambhir led side will be aiming for full points to stay in contention for the knock-out stage. In the morning, Gambhir (10) was cleaned by left-arm seamer Aniket Chaudhary, reported PTI. Ranji Trophy 2016-17 Points Table & team standings

Dhawan started the day on 29 and hit two more boundaries as both openers fell at the identical score of 52. The stocky Pant came in at the fall of Nitish Rana’s (24) wicket and started carting the bowlers with utter disdain. He did tonk slow medium pacer Puneet Yadav for three maximums as well driving the faster bowlers with ease, added PTI. 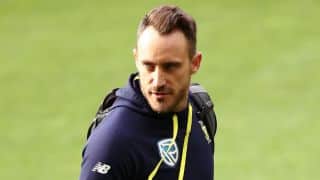