Delhi beat Rajasthan by 2 wickets at Krishnagiri Stadium (Wayanad), in Round 7 of Ranji Trophy 2016-17. After winning the toss, Delhi captain Gautam Gambhir invited Rajasthan to bat first, citing the nature of the track. The decision paid off, for Delhi bowlers put up a collective effort to restrict Rajasthan to 238. However, Amitkumar Gautam, who against all the odds, scored a stunning 106 that kept them in the hunt. His innings was studded with delightful 17 boundaries. For Delhi, Navdeep Saina and Vikas Tokas took a three-for each. Live blog: Delhi vs Rajasthan, Ranji Trophy 2016-17

In reply, Delhi scored 307, taking a lead of 69. Dhawan provided a steady start, stitching 38 off 51. Meanwhile, Gambhir, who was dropped in the second Test against England, scored 10. Rishabh Pant was the star of the innings for his 93-ball 75. All the same, it was indeed a sporting track, helping batters and bowlers equally to make an impact. Given this, Rajasthan knew they were still in the game if they post a sizable target and seal the match. But Delhi bowlers continued their stellar performance and kept Rajasthan at bay, bowling them out for 221. For that matter, a target of 153 was not that tough a task for Gambhir’s men. 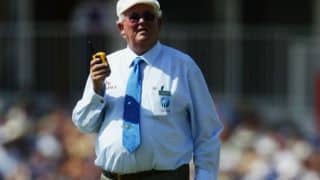