Former champions Uttar Pradesh lead fellow former champions Railways by 110 runs, on Day Two of Round 8 of the ongoing Ranji Trophy 2016-17, at Rajkot.

Former champions Uttar Pradesh lead fellow former champions Railways by 110 runs, on Day Two of Round 8 of the ongoing Ranji Trophy 2016-17, at the Saurashtra Cricket Association Stadium in Rajkot on Wednesday. UP are currently batting on 64 for the loss of 2 wickets, with opener Shivam Chaudhary (36) and Kuldeep Yadav on the crease. Earlier, UP were bowled out for 259 in their opening innings, while Railways in turn were shot out for 213. For Railways, opener Saurabh Wakaskar and Arindam Ghosh were the top scorers, scoring 74 and 58, respectively, while UP’s Imtiaz Ahmed claimed 5 for 34. Earlier, Suresh Raina top scored for UP with 91 in the opening innings. Full Cricket Score Ranji Trophy 2016-17, Day 2, Round 8

Earlier, Imtiaz Ahmed displayed some classy action with the ball as Uttar Pradesh were shot out for 254, but Railways failed to live up to the expectations in the opening innings with the bat. Ahmed’s 5 for 34 triggered Railways’ collapse from 147 for 2 as they were shot out for 213, giving Uttar Pradesh a 46-run first-innings lead. Railways, began their campaign on Day Two on 18 for 1, and were going strong with a 124-run stand between Saurabh Wakaskar (74) and Arindam Ghosh (58). However, it was Ahmed, who broke the partnership, that ultimately triggered the collapse of the Railways, and they were shot out for 213.

Uttar Pradesh had scored 259 in their first innings on Tuesday. In the second innings, Uttar Pradesh were 64 for 2 at stumps. They now have an overall lead of 110 runs with eight second innings wickets in hand. Opener Shivam Chaudhary was batting on 36 while Kuldeep Yadav was the other not out batsman without scoring at the draw of stumps, reported PTI. 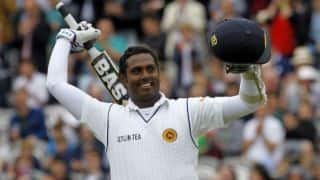