Bengal were buoyed by centuries from Sudeep Chatterjee and Manoj Tiwary in their second innings.

Bengal were in a commanding position at stumps on the third day of their ongoing Group A match of the Ranji Trophy 2016-17 against Mumbai. Bengal, who were bowled out for mere 99 in their first innings, produced an inspired performance with the bat in the second, reaching 433 for 8 at stumps. Bengal lead Mumbai by 303 runs in the second innings and the fourth and final day of the clash is going to test both the sides. Bengal will fancy winning the game after putting up a huge lead, whereas Mumbai will want to have a crack at the target since the wicket at the Vidarbha Cricket Association Ground in Nagpur remains good for batting.

Bengal were buoyed by centuries from Sudeep Chatterjee and Manoj Tiwary in their second innings. While Chatterjee scored 130 off 304 balls, Bengal captain Tiwary went on to score 169 off 288 balls with 22 boundaries and a six. For the fourth wicket, these two batsmen added as many as 271 runs which put Bengal right back in command, after making a poor start to the contest. Towards the end of the day, Pragyan Ojha was batting on 30 not out off 32 balls, accompanied by Amit Kuila on 18 not out.

Mumbai tried out as many as seven bowling options but failed to wrap up the Bengal innings. Dhawal Kulkarni, who provided two quick wickets on Day Two evening, claimed two more to finish the third day ay 4 for 108. Abhishek Nayar was measly as he returned with the figures of 25-3-70-2. 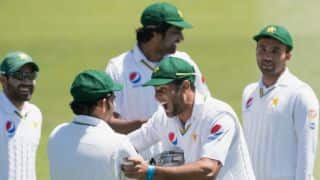 Glenn Maxwell: Batting below Matthew Wade was a bit painful