Ranji Trophy 2016-17, Round 9, Day 2 report and highlights: Prashant Chopra keeps Himachal ahead in clash against Goa

The second day belonged to Himachal batsmen Prashant Chopra and Sumeet Verma who scored 144 and 70 respectively to keep their side ahead in the clash.

A day that belonged to Goa saw their opponent Himachal trailing by mere 126 runs with 8 wickets to spare on Day Two of Ranji Trophy 2016-17, Round 9. The second day belonged to Himachal batsmen Prashant Chopra and Sumeet Verma who scored 144 and 70 respectively to keep their side ahead in the clash. Goa s Rituraj Singh and Amulaya Pandrekar got a wicket apiece at the end of Day Two. Resuming at 260 for 6 on the second day, Goa added another 120 runs to their overnight total. Sagun Kamat had already got his century, but it was Darshan Misal s century that was the driving force for Goa to go past the 300-run mark.

The day started with Shadab Jakati s wicket, who was dismissed for 13 with Himachal s Gurvinder Singh bagging his first wicket. Misal, who started Day Two on 68 ended up with a century off 218 deliveries. Ahead of lunch, Misal was grabbed for 106 and Mayank Dagar bagged his second wicket. Rituraj added valuable 30 runs in the lower order and was soon picked by Akshay Chauhan, who claimed his second wicket. By then Goa had already reached the 350-run mark. The final wicket of Srinivas Fadte ended the Goa innings at 380 and Chauhan getting his third to end the day on a sweet note.

Himachal were off to a steady start with opening batsmen Chopra and wicketkeeper-batsman Ankush Bains adding 25 runs for the opening wicket. Chopra went on to score his fifty while Bains was gone too soon, with Rituraj drawing the first blood. Chopra and No. 3 batsman RL Thakur added 66 runs for the second wicket to keep Himachal at safe position. However, before Himachal could reach the 100-run mark, they lost their second wicket, thanks to Pandrekar. But it was Chopra and Verma s unbeaten 163 run stand for the third wicket that kept Himachal s hopes alive in this game.

Himachal are placed with 20 points in Group C while Goa are below their competitors. Knowing that this is final round both will be itching to reach the top. 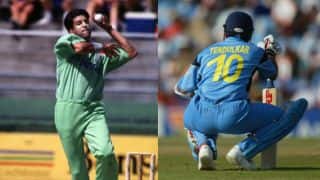