Maharashtra failed to put up any fight whatsoever, and tasted a heavy defeat.

Karnataka have grabbed the top spot in Group B of the ongoing Ranji Trophy 2016-17 after beating Maharashtra by 9 wickets in Round 9 encounter. Maharashtra failed to put up any fight whatsoever, and tasted a heavy defeat. Karnataka had gained a healthy lead of 182 from the first innings as their batsmen posted an imposing 345 on the board. They were backed by the bowlers, who did a commendable job in dismantling Maharashtra for 218 in the first innings. David Mathias was the pick of the bowlers with 3 for 37, while Abhimanyu Mithun bagged 2 for 44. For Maharashtra, their only moment of glory was Kedar Jadhav s 85, which also helped them edge past Karnataka s lead and set a meagre target of 37.

Ravikumar Samarth and Kaunain Abbas continued their good form and chased down the target without losing any wicket. The duo had done well to sail the Karnataka ship from choppy waters by stitching a 100-run partnership in the first innings, both men falling to Anupam Sanklecha. Pavan Deshpande played brilliantly for his 70, Stuart Binny got 46 and skipper Vinay Kumar led the team remained unbeaten on 56.

Earlier, Vinay Kumar s fifer derailed Maharashtra for 163 in the first innings. He was supported by Sreenath Aravind and Binny. With 37 points in their kitty, Karnataka is sitting right at the top in the Group B. However, though Jharkhand are on 32, they are yet to play their last match, against Odisha. While it is confirmed that Karnataka and Jharkhand will finish as the top two sides of Group B, the outcome of the Jharkhand vs Odisha match will decide the group topper. Maharashtra, on the other hand, have been eliminated following the defeat. Odisha and Delhi are the only teams in contention for the third team to join Karnataka and Jharkhand in the quarter-final. 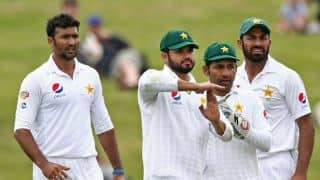