The live streaming of the Day Three will be available on Hotstar while the live telecast will be broadcast on Star Sports HD 1 and Star Sports 1.

Start of New Year and begins the semi-final stage of most-popular Indian domestic tournament Ranji Trophy 2016-17. This season saw some tough competition between 28 states but only 4 emerged victorious to reach the semi-final stage. Mumbai and Tamil Nadu, earlier title holders are playing the first semi-final while it is a moment of glory for Gujarat and Jharkhand, who have the opportunity to grab their maiden Ranji Trophy. The live streaming of the Day Three will be available on Hotstar while the live telecast will be broadcast on Star Sports HD 1 and Star Sports 1. The matches are being held at Nagpur and Rajkot.

After reducing Tamil Nadu to 261 for 6, Tamil Nadu took charge with ball after scoring 305 and brought Mumbai to 171 for 4 still trailing by 134 runs. Meanwhile, Gujarat s Priyanka Panchal ended his innings at 149. Gujarat finished with 390 after being in a strong position of 283 for 3 at stumps on Day One. Jharkhand ended the second day at 214 for 5, trailing Gujarat by 176 runs. Jharkhand entered their maiden semi-final stage and will not want to make any errors on Day Three. Jharkhand s wicketkeeper Ishan Kishan has been the top-scorer for the side with 61.

Ishank Jaggi is just 10 runs away from securing his fifty while Rahul Shukla is the new man on crease. Gujarat s RP Singh ran through the Jharkhand batting line-up with three wickets so far. Earlier, MS Dhoni visited Nagpur to interact with his home team Jharkhand during the training session.

In the other match, Mumbai were in a good position till Praful Waghela and Surya Kumar Yadav added 121 runs for the second wicket. As soon as their wickets were picked, Mumbai began to collapse. Newbie Prithivi Shaw managed to score just 4. On Day Three, Mumbai will expect their middle-order batsmen Shreyas Iyer and Aditya Tare to build a healthy lead against Tamil Nadu. Mumbai showed excellent bowling display with their key bowlers Abhishek Nayar and Shsrdul Thakur sharing eight wickets to end Tamil Nadu innings for 305. Mumbai are still trailing by 134 runs. 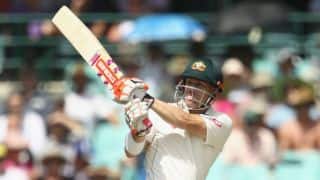 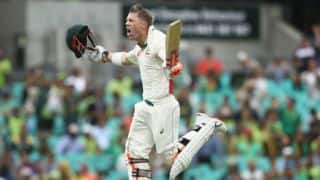