Rahul Singh possibly rescue Services from the jaws of a possible follow-on, as he steered them to 267 for seven against Goa on Day 3 of the Ranji Trophy tie.

Rahul Singh played a possible match-saving knock as he struck an all-important 89 and possibly rescue Services from the jaws of a possible follow-on, as he steered them to 267 for seven against Goa on Day 3 of the Ranji Trophy tie. Services would be going out all guns blazing for a draw on Sunday. Goa scored 606 for six and declared, while Services resuming the day on 39 for one, but were quickly down to 71 for the loss of four wickets, as Felix Alemao (3/52) striked thrice, denying Ravi Chauhan to scvore a half-century, as he fell short by just three runs. Meanwhile, Rahul Singh, who made his first class debut in the last match against Tripura, scored his second successive half-century. LIVE Cricket Score Ranji Trophy 2016-17, Day 3, Round 3

Rahul shared two crucial partnerships with Nakul Verma (29) and Muzzaffaruddin Khalid (43 batting) to lead the rescue act. Singh hit 15 boundaries and completed his second half-ton from 82 balls but he could not make it big and was dismissed by Shadab Jakati, who returned with an impressive 3/47. Diwesh Pathania was giving Khalid a fine support batting on 29 at the stumps, reported PTI. Ranji Trophy 2016-17 Points Table & team standings

On Day 1, Goa post a target of mammoth 606 for Services to chase as the team play in Round 3 of Ranji Trophy 2016-17. The team had a great start to their innings with two of their top-order batmen scoring centuries. Skipper Sagun Kamat remained unbeaten at 177 while opener Amonkar scored 101. Kamat went on to score an unbeaten 304 as he declared team s innings with 606 for 6. The middle-order batsmen also put up a decent performance with the bat but it was the leader who stole the show with his outstanding performance to help his team with a huge score and get in the driver s seat. 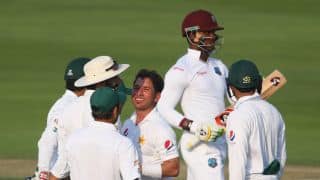 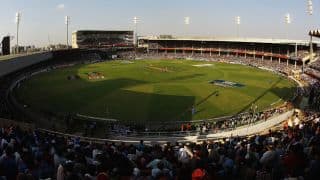