Six matches, five wins and the tag of defending Ranji Trophy champions. This speaks volumes of Gujarat s dominance in recent times. Parthiv Patel s men, in bid to their title defence, will face the Manoj Tiwary-led Bengal in the first quarter-final of the Ranji Trophy 2017-18, at Sawai Mansingh Stadium, Jaipur.

Gujarat has been enjoying phenomenal success off late. In 2015, they won the Syed Mushtaq Ali T20 tournament, the next season the Vijay Hazare Trophy came their way, followed by the Ranji Trophy triumph in 2016-17. Two back-to-back wins and a draw followed by a hat-trick of wins saw them bag a whopping 34 points the most among all sides.

Gujarat have been without their stars, Akshar Patel and Jasprit Bumrah. However, this has mattered little. They have found like-for-like replacements. Left-arm spinner Siddharth Desai, 17, has slipped into Akshar s shoes, claiming 28 wickets from 4 games at 22.82. Piyush Chawla s presence has further helped the youngster prosper. The former UP leggie has been Gujarat s trump card, picking 31 wickets 17.51. Chintan Gaja is only a season old and has already shone with the new ball. He has spearheaded the pace department with 22 wickets at 15.55.

Priyank Panchal has been continuing the rich form since last season. Though he well short of a 1,000, he managed to score close to 600 runs at an average of over 67. Parthiv will continue to hold the key. He has been picked in India s squad for the South Africa series and will look forward to get some runs under the belt. The concerning bit is that he has only 2 fifty-plus scores from 11 innings. The positives to be drawn from this: his last fifty-plus score was 173 and that was two innings back.

Bengal, on the other hand, have managed to sneak through to the quarter-final at Punjab s expense. They gathered 23 points from his 6 matches. The season began with the drama over Pragyan Ojha s availability. Ojha was finally allowed to shift to Hyderabad after much deliberation. Bengal have inflicted two innings defeats, against Chhattisgarh and Punjab. Their only defeat came in hands of Vidarbha, who went to top their group.

Openers Abhishek Raman and Abhimanyu Easwaran have been consistent. However, they will now hope for skipper Manoj and middle-order mainstay Sudip Chatterjee to be more consistent. Manoj has got a hundred while Sudip has 2 this season, but consistency has eluded them.

However, Bengal s success story this season can largely be attributed to Ashok Dinda and Mohammed Shami. The duo accounted for 49 per cent of wickets scalped by Bengal. Dinda, in fact, has been the most successful pacer in the tournament so far, bagging 30 wickets at 17.8. Shami and Wriddhiman Saha s absence will hurt Bengal.

The surface at Jaipur has been batting-friendly but pacers have enjoyed bowling there this season. Gujarat have the edge because of form but Bengal, in this season, have managed to find some hope in adversities. They have players who can turn matches to their favours with individual brilliances. 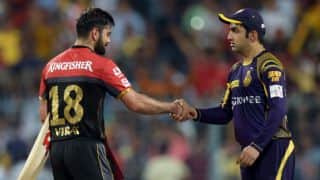