Rain and then wet outfield denied any play till tea on Day One of the third quarter-final of Ranji Trophy 2017-18 between Vidarbha and Kerala at Surat.

Rain and wet outfield denied play till tea on Day One of the third quarter-final of Ranji Trophy 2017-18 between Vidarbha and Kerala at Lalbhai Contractor Stadium, Surat. Western India has been receiving rainfalls since the past few days due to Cyclone Ockhi, and Surat received its share. Only 24 overs could be bowled in the day and Vidarbha, who elected to bat, were reduced to 45 for 3. Runs were hard to come by, and left-arm spinner KC Akshay accounted for the wickets of Vidarbha opener Sanjay Ramaswamy and Wasim Jaffer. Live Scores, Ranji Trophy 2017-18, quarter-finals, Day 1

Earlier, medium-pacer ND Nidheesh had sent back Vidarbha skipper Faiz Fazal for 2. Akshay, 21, playing only his third First-Class game, has now claimed 15 wickets at an incredible 10.6.

With Fazal, Ramasawamy and Jaffer back in the dressing room, Vidarbha have their hopes pinned on the in-form Ganesh Satish. Jalaj Saxena, who has been Kerala’s star this season, has been wicketless and will want to dominate the second day. Vidarbha will have to bat very well to at least put on 300 on the board.

Vidarbha had dominated Group D with 4 wins and 31 points. Kerala got the same number of points, notching up 5 wins and finishing only behind Gujarat in Group B. In doing so, the Dav Whatmore-coached side qualified for their first ever quarter-final in Ranji Trophy. 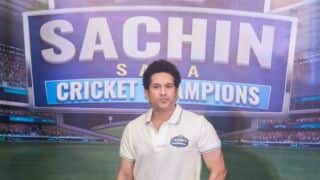