This will be Karnataka's 10th quarterfinal appearance in the last 11 editions.

Only 3 more victories will take a team towards the Ranji Trophy 2017-18 title. Simple, right? No. It isn’t. The 84th edition has just entered the knockouts. The competition will get intense, teams will leave no stone unturned and battle hard for supremacy. In quarterfinal No. 4, termed as clash-of-the-titans, Mumbai take on Karnataka at Vidarbha Cricket Association, Nagpur. Frequent visitors of the quarters, Karnataka, will have a tough ask against the most crowned side in Ranji Trophy. Nonetheless, Mumbai have had a rough ride so far, and will be without their key players. Will this pave way for Karnataka’s entry into the semis?

Karnataka were mauled inside two days by Tamil Nadu in the quarterfinals of the previous edition. Nonetheless, they have a well oiled side at their disposal this time around. Their biggest strength is that an opposition cannot overlook any player. The likes of Abhimanyu Mithun, Krishnappa Gowtham and Ravikumar Samarth have stood tall in crisis situations.

Mayank Agarwal has single-handedly carried the batting responsibilities on his shoulders. With 1,064 runs at 133, he has ensured a quarterfinal date for his state. Mithun, on the other hand, has wrecked havoc of sides with five-wicket hauls on flat tracks. If he is able to maintain pressure, Karnataka would breathe a sigh of relief.

To top it all, Manish Pandey has also been in splendid form in the limited appearances. In 4 games, he has amassed 454 runs at 151.33. If there is an area of concern, it is their fielding. They have leaked runs due to rusty fielding efforts and also been guilty of releasing pressure with too many boundaries in crucial hours.

One cannot afford to have any chink in the armour while facing the best in a knockout. Talking about the best, let us move our focus towards Mumbai…

Surely, Mumbai isn’t an invincible force. They have made it to the last 8 by virtue of two victories, that too against weaker sides, Tripura and Odisha. On the hindsight, they managed to remain unbeaten as well. It hasn’t been an easy entry into the last 8. This maybe Karnataka’s best chance to break the shackles and edge past Mumbai, and stamp their authority as new champions. However, Mumbai are well aware of bringing their A game in must-win encounters. They needed a win to progress into the quarters, and achieved it with a bonus point.

Siddhesh Lad has been Mumbai’s man of the hour. He has, time and again, bailed his side from troubled waters in the current edition. He lifted the side against Baroda, Andhra and toppled Tripura with a fine century. Nonetheless, others will have to step up as well.

Mumbai have had a bumpy ride due to many star players remaining off colours. Their bowling looks slightly weak with the absence of Shardul Thakur due to shoulder injury. Shreyas Iyer is on national duty, and will be a major miss as well. Dhawal Kulkarni will spearhead an inexperience bowling lineup and look to inject regular breakthroughs. It will be interesting to see if they go with the seasoned campaigner, Akhil Herwadkar, with the openers, Prithvi Shaw and Jay Bista going all guns blazing.

“It’s very important to dominate the first session, but it’s not a one-innings game. Five days is a lot of time for anybody to come back and we need to be very careful. It’s all about being fresh and focused. It’s my responsibility to make sure the team remains in the present. On the bowling front, we need to cut down those boundary balls”, said Vinay Kumar, Karnataka skipper.

“There was a time when we struggled to find openers. We kept trying out five or six pairs after Wasim Jaffer moved out. That was the only puzzle in the jigsaw we were yet to find. Now, we’re in a position where our first-choice and most-experienced opener Akhil Herwadkar is struggling to come back in because Prithvi Shaw and Jay Bista have established themselves”, said Aditya Tare, Mumbai skipper. 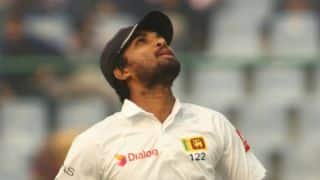