Much like on Day one, the group A tie between Hyderabad and Maharashtra stood washed out.

Much like on Day one, the Ranji Trophy 2017-18 group A tie between Hyderabad and Maharashtra stood washed out. In the other remaining matches of the group, Delhi took charge against Assam, while Uttar Pradesh pounced over Railways yet again.

Delhi wrapped up Assam s innings for 258 runs in the first hour of play itself with skipper Ishant Sharma taking a rare fifer. In response, Assam bowlers snapped Unmukt Chand and Dhruv Shoey in quick time. Seasoned player Gautam Gambhir rose to the occasion (as usual) and snitched a 207 run stand with Nitish Rana. Rana, a twenty20 superstar in India, showcased levelheadedness as he reached his third FC hundred. Gambhir on the other hand reached his 40th FC fifty. Rana got out on 110 but Gambhir carried his bat.

Uttar Pradesh and Railways played a rather topsy-turvy game at Lucknow. UP batsmen were unable to do any good of the good work their bowlers did on opening day. They kept on losing wickets at crucial junctures. It was only Akshdeep Nath that stood talk against Railway s bowling. He scored 75 off 160 balls. Shivam Chaudhary and Rinku Singh, who scored 44 and 42 runs respectively, helped him.

Railways in their second innings are 27 for 3. Ankit Rajpoot picked 2 wickets that gave Uttar Pradesh a 41 run lead. 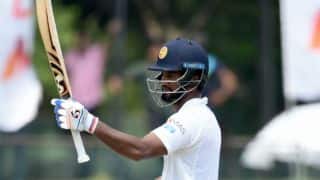