Delhi moved on from their tumbling start, and are now dominating opponents Railways, as they lead by 389 runs at stumps of Day Two of second round of Ranji Trophy 2017-18. Delhi, who were 318 for 6 at stumps of Day One, eventually put up 447 before reducing their opponents to 58 for 5. Manan Sharma (136) and Pulkit Narang (55) played crucial roles as the middle and lower-middle order lifted the team after top three batsmen fell for paltry scores. Later, Ishant Sharma and Manan helped the team maintain their domination by dismissing five Railways batsmen early.

Ishant emerged as the perfect frontline pacer for Delhi, removing two batsmen within first 5 overs. Later, he picked up Shivakant Shukla, who was the only Railways batsman to register a double-digit score on Sunday. Manan picked up 2 wickets.

After bundling Assam for 145, Karnataka put forward an equally impressing batting performance as they were 427 for 6, leading by 282 runs at stumps of Day Two, second round of Ranji Trophy 2017-18. Though Ravikumar Samarth did not find much support from the rest of top order, he played a fine knock of 123. Krishnappa Gowtham later took charge, remaining unbeaten at 147 along with Shreyas Gopal (38*). Arup Das and Swarupam Purkayastha were the pick of the bowlers for Assam with 3 wickets each.

Earlier, Gowtham and Gopal had rattled Assam s batting on Day One, restricting them at 145. Gokul Sharma was the only batsman to have scored a fifty in the innings.

The Hyderabad-Uttar Pradesh match could not be started even on Day Two due to wet outfield. On Day One, the toss was delayed due to rain and then later due to unplayable conditions. 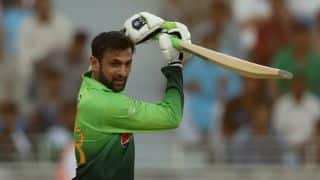