In the competitive Group C, all the six teams have so far played competitive cricket as all the three games look poised for a draw.

In the competitive Group C, all the six teams have so far played competitive cricket as all the three games look poised for a draw. Tamil Nadu currently lead by 99 runs to Tripura on Day Three of second match-week of the Ranji Trophy 2017-18, at the MA Chidambaram Stadium in Chennai on Monday. Earlier, winning the toss and electing to bowl first, Tripura were sent in to bat, as they were bundled for 258 on Day Two, courtesy of Smit Patel’s 99 and Yashpal Singh’s 96, while TN’s Krishnamoorthy Vignesh claimed 4 for 41. In reply, TN made a strong start to their innings as until stumps on Monday, they were 357 for type loss of four wickets, courtesy of Washington Sundar’s 159 and Baba Indrajith’s unbeaten 89. FULL CRICKET UPDATES, Ranji Trophy 2017-18, Round II, Day 3

In the other game, Andhra lead Baroda by 132 runs at the Reliance Stadium in Vadodara on Monday. Electing to bowl first, Andhra bunlded Baroda for 373, as Kedar Devdhar scored 93, Vishnu Solanki scored 61, Swapnil Singh scored 88, while Atit Sheth remained unbeaten on 70. As for Andhra’s bowlers, Bandaru Ayyappa claimed 4 for 69. In reply, Andhra have so nfar provided decent fightback, scoring 505 for the loss of nine wickets, courtesy of Hanuma Vihari’s 150 and Ricky Bhui’s 145, while Atit Shethhas so far claimed 5 for 77.

Meanwhile, record champions Mumbai too seemed to be in good stat of their game as they lead Madhya Pradesh by six runs in the first innings on Day Three at the Emerald High School Ground in Indore on Monday. Electie to bat first, Madhya Pradesh were bundled for a fair score of 209, courtesy of Naman Ojha’s 180 and Ankit Sharma’s 67, while Mumbai’s Akash Parkar claimed four for 70. In reply, Mumbai are currently on 415 for the loss of eight wickets at stumps on Day Three, courtesy of Jay Gokul Bista’s 125 and Suryakumar Yadav’s 91. Therefore, as things look currently, all the three games are poised for a draw unless there is something miraculous on Day Four from either of the sides. 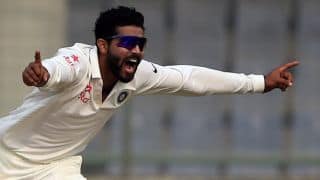