After a decent start, Goa lost 4 wickets at the end of Day Three as they face Chhattisgarh in the Group D match of Ranji Trophy 2017-18. Chasing Chhattisgarh s 458, Sumiran Amonkar s 79 and Sagun Kamat s 47 kept Goa in hunt for a first-innings lead. However, the Chhattisgarh bowlers later picked up few successive wickets to put their opponents under pressure. At stumps of Day Three, Goa put up 223 for 4 trailing Chhattisgarh by 235 runs. Reagan Pinto (25*) and Saurabh Bandekar (5*) will resume batting on Day Four.

Earlier, Mohammad Kaif (61), Manoj Singh (125), Jatin Saxena (82) and Sumit Ruikar (57) powered Chhattisgarh to a big total of 458. The Goa bowlers had restricted the top order not to score big runs but the middle and lower middle order made up for the primary collapse, taking their side to a comfortable position.

Chasing Himachal Pradesh s gigantic first-innings total of 729 for 8 decl., Punjab batsmen did a commendable job, putting up 484 for 6 at stumps of Day Three. Punjab got a strong start by their openers, both of whom scored half-centuries. Later, yet another half-century by Anmolpreet Singh and a strong, run-fetching partnership between Abhishek Gupta and Abhishek Sharma helped Punjab reply to Himachal s challenge. The pair of Gupta (129*) and Sharma (81*) remained unbeaten till stumps on Day Three. They will have the rest they need overnight and can start afresh on Day Four, which will be a threat to Himachal, who did exceptionally well with the bat.

Gurvinder Singh alone has picked up 5 of the 6 wickets so far and will seek help from his fellow bowlers to bundle their opponents soon on Day Four. Earlier, Prashant Chopra s triple century guided Himachal to the massive total in the first innings. Apart from him, Paras Dogra (99), Sumeet Verma (79) and Ankit Bains (80) contributed majorly.

In search of a big target for their opponents Services, Bengal batted again to put up 71 without any loss on Day Three of Ranji Trophy. Bengal had declared their innings with 552 for 9 decl. while Services put up 359 in reply. Navneet Singh s century, Ravi Chauhan s 53 and Rahul Singh s 43 were the only highlights of Services innings. Bengal bowlers complimented the work done by their batsmen. Aamir Gani s 5-for bundled Services and helped Bengal take the important first-innings lead by 193 runs..

Earlier, the Bengal top order had put up impressive performance to guide their side to a big first-inninsg total. Sudip Chatterjee starred with a century while four other half-centuries were scored in the innings. Openers Abhishek Raman (40*) and Abhimanyu Easwaran (31*) will resume batting on Day Four. 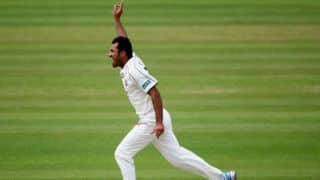