Ravindra Jadeja remained the star of round two of Ranji Trophy 2017-18 with his all-round performance as Saurashtra inflicted an innings defeat on Jammu and Kashmir.

Ravindra Jadeja remained the star of round two of Ranji Trophy 2017-18 with his all-round performance as Saurashtra inflicted an innings defeat on Jammu and Kashmir. Jadeja had scored 201 of Saurashtra s 624, and later bagged a total of 7 wickets in the match. On the other hand, Yuvraj Singh failed with the bat in both occasions as Punjab lost their match by an innings and 117 runs to Vidarbha. READ: Saurashtra register innings win over Jammu and Kashmir

Mohammed Shami continued to lead Bengal s pace attack as he picked up 4 wickets on Day Three. Ashoke Dinda, who ended Chattisgarh s innings for 110 with his 7 wickets, remained wicketless the next innings. Piyush Chawla was the leading wicket-taker for Gujarat on the Day as he got a 3-for. Irfan Pathan once again went wicketless.

Though Tamil Nadu is in the driver s seat, for the two stars Ravichandran Ashwin and Dinesh Karthik Day Three was pretty ordinary. Ashwin, who had picked up a solitary wicket on Day Two, bagged just another on Monday to end his spell. Karthik also disappointed scoring only five runs.

Mumbai s Surya Kumar Yadav s performance was rather impressive. Surya Kumar was team s second highest run-getter in the innings with his 91, but was unlucky to not get his century. 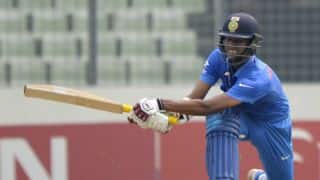