Three days prior to championship, Irfan was asked to captain Baroda and mentor the young players.

Over time India have stressed on the importance of fitness. Today, it is considered to be a prime parameter if a cricketer wants to make it to the 2019 World Cup.

Irfan Pathan was downed by a series of injuries. Since 2012, he has not played any international match.

Pathan has played for five IPL franchises. Playing for Gujarat Lions in season 10, Pathan was drafted in for a mere match. To make matters worse, things seem bleak for him in First-Class cricket as well. Lucky was Irfan that he was made the Baroda captain. It came as a respite amidst tough times.

Baroda have played two matches in the ongoing Ranji Trophy 2017-18. They lost the opening match against Madhya Pradesh, followed by a draw against Andhra.

Baroda will be playing only 6 six league games in this year s domestic season. Taking into consideration the amount of games to be played, Baroda Cricket Association (BCA) want a young captain for the side. For now, they have named Deepak Hooda to lead the side for the next game against Tripura, removing Pathan from the helm.

BCA secretary Snehal Parikh mentioned to Indian Express that it was the selection committee s call to go with a young captain. However, the door is not closed on Irfan.

The selection committee took a call to drop Irfan and pick Hooda as the captain. If you look at the season, from this year onwards we will be playing only six league games. Baroda lost to Madhya Pradesh. Last game, the result didn t go in our favour. The selectors thought it should be ideal if we try a new captain for the next game.

However, this is not the first time Irfan is at loggerheads with BCA. Last year, they had dropped the all-rounder on the basis of fitness. Irfan was even considering to switch teams. But the matter was resolved in due course.

Three days prior to championship, Irfan was asked to captain Baroda and mentor the young players.

In the first game against Madhya Pradesh, Irfan scored 80 and also scalped a wicket. 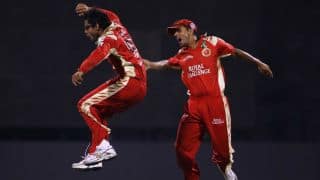