Dhruv Shorey has so far amassed 509 runs in this season so far.

After winning the toss, Vidarbha made good use of the conditions at Indore. Chasing their eighth Ranji Trophy title, Delhi were off to a poor start. It was the pair of Rajneesh Gurbani and Aditya Thakare that rattled past the likes of Kunal Chandela, Gautam Gambhir and Rishabh Pant. For Delhi, Dhruv Shorey stood tall and defied all odds to bring his side out of a tight spot.

Shorey along Himmat Singh steered Delhi s ship past murky waters. Dhruv continued his tremendous form this season and got past 500-run mark. Dhurv snitched up a crucial 105-run stand for the fourth wicket. Himmat scored his fourth consecutive half-century before falling for 66. Dhruv survived the day and remained unbeaten on 123 alongside Vikas Mishra (5) on 271 for 6.

Earlier, Thakare rocked Delhi’s top-order picking Chandela and Rana. Chandela was caught at covers,wherein Rana was adjured leg-before. Rana looked aggressive against the spinners but could not do much. Gambhir was unlucky to be dismissed for 15. The ball ricocheted off his thigh and clipped the stumps off Akshay Wakhare’s bowling.

Star of Vidarbha’s win over Karnataka, Rajneesh Gurbani claimed two wickets; Rishabh Pant and Himmat. Pant also became the youngest-ever captain to led a side in a Ranji Trophy final. 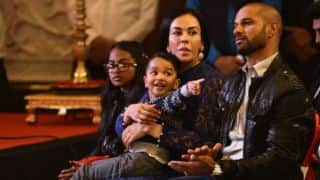