Railways lead Group A with 6 points followed by Delhi with 3 points.

The topsy-turvy game between Delhi and Assam ended in draw in Round 1 of Ranji Trophy 2017-18. With a first innings lead, Delhi earned 3 points while Assam ended with one. Ishant Sharma, Gautam Gambhir and Nitish Rana ruled the roost for Delhi. Opting to bowl, the home team took the early advantage.

The game ended at 49 for 2, chasing 74. Unmukt Chand and Milind Kumar remained unbeaten on 25 and 6 respectively. First innings centurion Nitish Rana was gone cheaply for 4 while opener Anuj Rawat was gone 13 after adding 23 runs for opening wicket. Krishna Das provided early in roads scalping both the wickets.

Assam, who began the final day of Round 1 at 60 for 3, ended their second innings at 255. Sibsankar Roy and Tarjinder Singh added a 74-run stand. In the process, Roy also notched up his fifty. After Tarjinder was scalped by Manan Sharma, Wasiqur Rahman provided able support to Roy. He added a 61-run stand along with Rahman before getting dismissed by Manan. His stay of 222-ball 87 comprised of 11 fours.

Rahman too got to his fifty but received little support from the other end. Manan s entry wreaked havoc for Assam, ending with figures of 3 for 58 while Navdeep Saini and Milind Kumar shared 4 wickets.

Earlier, Ishant earned 5-wicket haul by wrapping Assam s first innings for 258. Assam s Gokul Sharma and Swarupam Purkayastha repaired the damage done by the top-order. Their fifties surged Assam beyond 200-run mark. The duo also stitched 58-run stand that lifted Assam from the ruins. Swarupam tried to keep the momentum towards the side by building a handy partnership with Abu Nechim. However, Ishant struck once again wiping off the tail.

Delhi batsmen returned good. Gambhir notched up 137 and also added a 209-run stand with Rana. The latter perished for 110. Soon, Gambhir headed back to the hut as well. It was debutant Anuj Rawat and Manan who maintained the advantage in favour of Delhi. They got their respective fifties and added 122 runs for the seventh wicket. For Assam, the only saviour was Nechim s 7 for 68.

The bowlers came well when Saini cleaned the openers. Newbie Kulwant Khejroliya also joined the party removing the first essay half-centurion Gokul. Assam were trailing by 117 at the close of Day Three.

A game that belonged to Uttar Pradesh, saw Railways snatching the glory on Day Three with a remarkable 21-run win. Chasing a target of 94, Uttar Pradesh were bowled out for 72. Railways pacers, Anureet Singh and Avinash Yadav turned around the luck for their side sharing 13 wickets between them. The latter was adjudged Man of the Match ending with figures of 7 for 112. With the bat, Ashish Yadav and Arindam Ghosh shone with their respective fifties from the first and second essay of Railways.

For Uttar Pradesh, skipper Suresh Raina woes continued as he managed to assimilate just 32 runs of the game. Akshdeep Nath s 160-ball 75 was the only talking point from Uttar Pradesh s batting line-up. Uttar Pradesh received little relief from their bowlers Ankit Rajpoot and Zeeshan Ansari who combined force to claim 13 wickets, albeit for a losing cause.

Man of the Match: Avinash Yadav

Rains ensured there was no result in the Maharashtra and Hyderabad tie. After no match in the first three days, the final day also witnessed no play and was abandoned without a ball being bowled. There was no rain on the final day. However, the heavy downpour on Sunday evening rendered the ground unfit to play. The teams ended up sharing a point each.

Hyderabad will now take on Uttar Pradesh on October 14 at the Gymkhana Ground in Hyderabad. 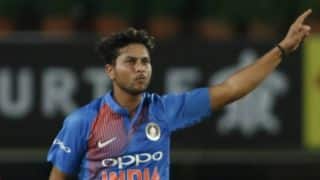