Madhya Pradesh get 6 points from their tie while Andhra have sneaked out 3.

Yusuf Pathan‘s second hundred of the match and the 10th of his First-Class career could not prevent Madhya Pradesh’s (MP) outright win against Baroda. Following on, Baroda were 41 for 1 at stumps on Day Three. They would have hoped for a point at least by playing out a draw. Pacers Ishwar Pandey and Avesh Khan triggered a collapse and Baroda were reduced to 68 for 7 before another heroic knock from Yusuf came to rescue. He added 218 for the eighth wicket with Atit Sheth. Sheth, a 21-year-old medium-pacer slammed his maiden First-Class hundred.

Yusuf ran out of partners as Pandey claimed his 11th five-for of his career to restrict Baroda’s lead to 69. It promised a repeat of the Railways-Uttar Pradesh contest when MP were reduced to 0 for 2 after 3 balls with Sheth sending back Waseem Ahmed and Naman Ojha back in the hut. But Rajat Patidar and Harpreet Singh ensured there were no more jitters as they walloped an outright win to bag six points.

Man of the Match: Shubham Sharma

Tamil Nadu (TN) and Andhra tussled in a gruelling last day’s play. Andhra lost 7 wickets in their pursuit of 218 and fell short of an outright win by 20 runs. Andhra, who dominated most of the match, could not repeat their bowling heroics of first innings.

TN skipper Abhinav Mukund fell for 95. Murali Vijay, who was injured on Day Three, returned to strike 55. Baba Aparajith slammed his sixth First-Class hundred to help TN to 350. They made a declaration setting a target of 218.

TN had their hopes pinned on Ravichandran Ashwin. However, Ashwin responded with 2 wickets and went for almost 6 an over, giving Andhra an edge in the chase. However, Andhra also lost wickets at regular intervals and eventually ended 7 down but 20 runs short. Andhra will, however, be happy with 3 points as TN got only 1 from their home game.

Man of the Match: B Sumanth

Heavy rains at Cuttack had allowed only 2 overs of cricket in the first three days of this game. The fourth day saw a century from Tripura opener Udiyan Bose. They declared at 194 for 8. Odisha batted 5 overs to score 18 for 1. The game ended in a draw with both sides sharing a point each. 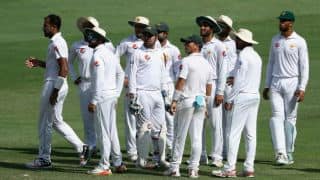