KL Rahul and Manish Pandey will be donning the Karnataka whites as the hosts take on a depleted Delhi side in a fourth round Ranji Trophy.

Alur: Test opener KL Rahul and Manish Pandey will be donning the Karnataka whites as the hosts take on a depleted Delhi side that will miss its skipper Ishant Sharma in a fourth round Ranji Trophy group A encounter on Thursday. Karnataka, with 20 points from three games, are currently at the top of the table while Delhi, with 16 points, are in second place. In terms of quality, Karnataka are way ahead of Delhi with presence of current national team players like Rahul and Pandey, back in the mix to beef up the batting. Add to it, India A captain Karun Nair, who is slowly getting back to form after a lean patch. Besides, there is also talented opener Ravikumar Samarth, who was impressive during India A’s tour of Australia while Mayank Agarwal has recently hit a triple hundred. Ranji Trophy 2017-18: Karnataka, Delhi, Hyderabad register victories

All-rounder Stuart Binny at No 7 gives the team necessary balance with spin duo offie Krishnappa Gowtham and leg- break bowler Shreyas Gopal no mug with the bat. The pace attack will be handled by the seasoned skipper R Vinay Kumar alongside Abhimanyu Mithun, who got a five-for in the last game against Maharashtra. For Delhi, right-arm pacer Vikas Tokas and left-arm spinner Vikas Mishra are likely to be drafted in the playing XI.

Ishant, who is in the Indian team for the Sri Lanka Test series, played the first three matches and also bowled reasonably well in the two outright wins that Delhi recorded. In his absence, Navdeep Saini will lead the attack with Kulwant Khejroliya for company. Tokas is expected to fill in as the third pacer for Ishant. Pulkit Narang, who had been a complete failure as a specialist spinner, has not been included in the squad and Mishra will make a comeback after being dropped from the XI that played against Uttar Pradesh. 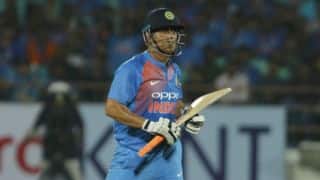