Ranji trophy 2017-18 is nearing its conclusion. On the first Day of the semi-final between Bengal and Delhi, the former are 269 for 7. In the second semi-final Karnataka got Vidarbha out for 185 and lost their 3 wickets scoring 36 runs. The live cricket streaming of the match between Vidarbha and Karnataka will be available on Hotstar, while the live telecast of the Bengal vs Delhi match will be available on Star Sports. The Vidarbha-Karnataka match is being played at Eden Gardens, Kolkata while Delhi-Bengal match is being played at Maharashtra Cricket Association Stadium, Pune.

In the first semi-final, Bengal opted to bat against Delhi; both the openers were dismissed early on 54. Sudip Chatterjee(83) built a good partnership with Writtick Chatterjee(47) and captain Manoj Tiwary(30), taking Bengal s total to 269. Navdeep Saini and Manan Sharma shared two wickets each and helped reduce Bengal to 7 wickets end of day 1.

The second semi-final had a delayed start as the Vidarbha team was struck in traffic. Vidarbha batted first after winning the toss but could manage 185 runs. Aditya Sarvate scored 47. Abhimanyu Mithun picked up 5 wickets for Karnataka.

Karnataka, who batted for 14 overs, were restricted for 36 for 3 with their highest run-scorer Mayank Agarwal back in the pavilion at stumps. 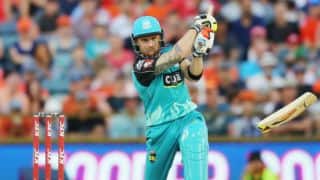