Bengal skipper Manoj Tiwary and senior speedster Ashoke Dinda will be playing their coveted 100th first-class game when the side takes on Chhattisgarh in its second Group D encounter of the Ranji Trophy.

Raipur: Bengal skipper Manoj Tiwary and senior speedster Ashoke Dinda will be playing their coveted 100th first-class game when the side takes on Chhattisgarh in its second Group D encounter of the Ranji Trophy.

“Personally, for me 100 is just a number. I will go out and play with the same intensity that I had when I made my debut. It feels good to play 100 first-class matches because so many people have shown faith in my abilities. I am grateful to God and these friends and seniors for being by my side. This makes the game special,” said Tiwary. Live cricket scores: Ranji Trophy, Round II

Tiwary, who has stacked up over 7000 runs against his name with 23 hundreds in first class cricket, expressed his gratitude to parent body CAB, friends and family.

“When I was young, I always wanted to play Ranji Trophy for Bengal. So when I got a chance to represent Bengal, I was happy. A lot of people had been a part of this journey. My parents, for their sacrifices, my brother for constant encouragement and my wife, who is my biggest inspiration. I should also mention my coach Manabendra Ghosh without whose guidance, I would not have achieved anything.

“I also want to thank all my captains Sourav Ganguly, Devang Gandhi, Rohan Gavaskar, Deep Dasgupta and Laxmi Ratan Shukla, who guided me and helped me become a better cricketer and sportsman,” he said.

Dinda on his part said: “It’s an emotional and nostalgic moment for me. I would like to thank everyone who stood by me and had faith in my abilities. Especially Atal Sir, who has been my guide and mentor all these years.

“It is a great honour to lead Bengal’s attack for all these years. Tomorrow, that way is a special day when I get on to the ground. Thank you all once again for being by my side,” he said.

The duo will be presented with a cheque of Rs 1 lakh each by CAB secretary Avishek Dalmiya before the start of the match. 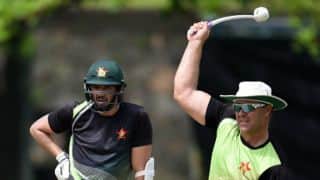