The controversy has now transformed into an axe that fell upon the former Hyderabad star.

Cricket Association of Bengal (CAB) have announced a 16-member squad for Ranji Trophy 2017-18, and the name Pragyan Ojha is missing. The controversy has now snowballed into an axe that fell upon the former Hyderabad star. The press release from CAB stated: “The following players have been selected to represent Bengal in the Ranji Trophy Tournament matches to be played against Services from October 6 to 9 at Palam and Chhattisgarh from October 14 to 17 at Raipur.” ALSO READ: Hyderbad Cricket Associaton wants to get back Ambati Rayudu, Pragyan Ojha

Coached by Sairaj Bahutule, Bengal side will take field without the experienced Ojha. The left-arm orthodox bowler found himself in controversy when Hyderabad had earlier announced that the bowler is set to return to his former side. The developments had irked CAB President Sourav Ganguly who denied Ojha the NOC and firmly stated, “He wanted a release but we have not given him. Bengal signed him when Hyderabad were in Plate. We need his service, and how can he leave us now…”

The cold war intensified when Bengal were forced to name their squads for the warm-up games ahead of the season without him as they “failed to establish” contact with him.

“We have not yet established any contact with him, so we are forced to name the squad without him,” CAB joint secretary Avishek Dalmiya then said.

Ojha has 113 wickets in Tests. In fact, in the last Test that he represented India, he bagged the Man of the Match award. The Test is well remembered for being Sachin Tendulkar’s last. This axe comes as a huge blow for the 31-year-old who has further jeopardised his chances of making a comeback at highest level.

Ojha has been lacklustre for Bengal in the last season. He claimed 10 wickets from 6 matches at 39. However, he was impressive in his first season (2015-16) for Bengal, where he claimed 36 wickets at just over 24.

“His name was not discussed, as we don’t know about his whereabouts,” CAB joint secretary Avishek Dalmiya told PTI.

Bengal have picked uncapped left-arm spinner Pradipta Pramanik, who has impressed with one four-wicket and another three-wicket haul in two warm-up games in Surat.

“Pradipta has been doing very well and the squad is equipped in all departments to do well,” Avishek, who attended the meeting with selectors Arup Bhattacharya, Madan Ghosh and Kalyan Chowdhury, said.

Bengal have also a second left-arm spinner in Anurag Tiwary who’s currently with U-23 squad.

“Both are ready and good enough to play for Bengal,” Avishek added.

Talking about Ojha, selector Bhattacharyya said: “We are in dark about Pragyan. We do not know whether he is training or not and what condition he is now. We have not been able to establish contact with him.”

Ojha did not receive any call but remained active on his official Twitter handle posting a congratulatory message on September 22, to Kuldeep Yadav for his hat-trick in the second ODI vs Australia in Kolkata.

As expected Manoj Tiwary has been named the captain while southpaw Sudip Chatterjee, who is a part of the India A contingent, is named the vice-captain. 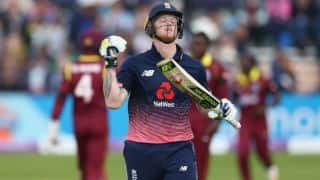