Prithvi Shaw is inching closer to Sachin Tendulkar s record of seven centuries before the age of 18.

Prithvi Shaw continued to score big, slamming his fourth Ranji Trophy and fifth First-Class century. Shaw scored 114 off 173 against Andhra during Round 6 of 2017-18 Ranji Trophy, comprising 14 fours and a six.

He lifted Mumbai from 20 for 2 to 193 for 4. Shaw built crucial partnerships with Surya Kumar Yadav and Siddhesh Lad.

With every century, Shaw is inching closer to Sachin Tendulkar s record of seven centuries before the age of 18.

Shaw had slammed a hundred on his Ranji Trophy debut, and then went to become the youngest player to score a century on Duleep Trophy debut. Recently, against New Zealand, Shaw represented the Indian Board President s XI in a one-day warm-up game and hit a fine 66, which also drew praises from pacer Trent Boult.

Shaw was excluded from the Asia Cup U-19 tournament so he can represent Mumbai in Ranji Trophy. 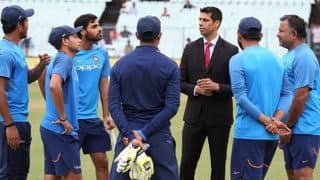