Saurashtra continues to top Group B standings in Ranji Trophy 2017-18 after Round 2 with Kerala coming second.

Saurashtra continued to top Group B standings in Ranji Trophy 2017-18 after second round of games. Saurashtra thrashed Jammu & Kashmir by an innings and 212 runs on Day 3, while in other matches that went into Day 4; Gujarat edged past Kerala to gain a 4 wicket win as final match between Team Rajasthan and Jharkhand ended in a draw.

It was only Panchal and Merai, who resisted Kerala bowlers making 30 and 21 runs respectively. It was skipper Parthiv Patel and Chirag Gandhi that survived s hostile spell of bowling and guided Gujarat to a 4 wicket win.

Patel remained unbeaten on 18, while Gandhi was not out on 11 as Gujarat reached their target of 106 runs in 42.3 overs. Jalaj Saxena yet again stared with the ball picking 2 for 18 in his 14.

In the second match of the day, Jharkhand were able to keep Team Rajasthan at bay. Starting the day still 25 runs behind, visitors took lead thanks to a brilliant century by Nazim Siddiqui. He quickly completed his hundred in 142 ball but got out on next delivery.

Jharkhand received a mini-jolt with Virat Singh, Siddiqui and Saurabh Tiwary getting out within 10 runs. It was then that Ishank Jaggi and Ishan Kishan held their own against Pankaj Singh and Tajinder Singh Dhillion.

The pair without any hurry took Jharkhand past the 200-run mark by lunch. Jaggi soon reached his fifty in 102-balls. The pair added 63 runs, before Kishan gave his wicket away for 67-ball 33.

Kaushal Singh joined Jaggi and kept things steady for his side. The pair gave Jharkhand a 150+ lead before Kaushal was stumped for 39 of Mahipal Lomror.

Jaggi recorded his hundred in 193 deliveries with Jharkhand on 332 for 6.

With 13 overs remaining in the day, both teams decided to end the game in a draw with Team Rajasthan taking 3 points courtesy first innings lead, while Jharkhand were handed a point. Amitkumar Gautam was awarded the man of the match for his 107 in the first innings for Team Rajasthan.

Man of the Match: Amitkumar Gautam 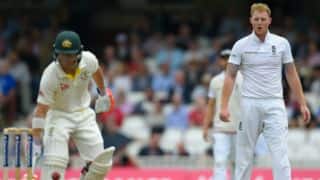 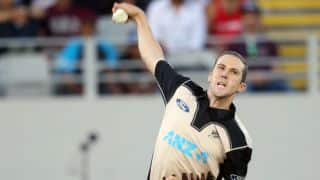