Quality cricket has been the highlight of rounds 1 & 2, and opening day of round 3 did not disappoint either.

Ranji Trophy 2017-18 so far has exhibited a lot of hard-fought cricket, and its quality were been the highlight of rounds 1 & 2. However, the opening day of round 3 did not disappoint either. With marquee clash between Mumbai and Tamil Nadu grabbing highlights, India s domestic stars dominated the day.

Let us go through the headline-grabbers from day one.

KL Rahul: Recalled for T20I series against New Zealand, KL Rahul failed to impress yet again in the Ranji edition. He managed just 4 runs for Karnataka.

R Ashwin: Ashwin decided to announce himself on the domestic circuit once again. Ashwin toiled long and hard to snatch wickets against Mumbai.

His first wicket came easy in the form of Siddesh Lad, while Shaw s wicket took a lot of effort and patience.

Piyush Chawla: In only his third game for Gujarat, Piyush excelled with the ball. He outfoxed the likes of Shubham Khajuria, Parvez Rassol and Ram Dayal en-route his 22nd five-wicket haul. 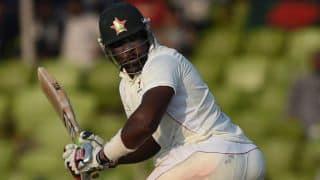 Zimbabwe off to positive start for historic chase against West Indies before lunch, Day 4, 1st Test