Punjab captain Jiwanjot Singh slammed an unbeaten 215 on Day One of Round 3, Ranji Trophy 2016-17.

At Porvorim: Punjab captain Jiwanjot Singh slammed an unbeaten 215 on Day One of Round 3, Ranji Trophy 2016-17. Playing against Goa, Punjab scored 396 for 2 at a run rate of 4.4. Of the seven bowlers used, Rituraj Singh was the only wicket-taker. Amit Yadav and Darshan Misal conceded over 100 runs without taking a wicket.

There was another centurion at Porvorim: Anmolpreet Singh scored 103 off 149 balls including 11 fours.

Stuttering at second-last position in Group D, Punjab will look to carry on the momentum and make amends for the lost match. Meanwhile, Goa have drawn both matches. If they draw this one, they will remain above Punjab in the points table. Given the score Punjab have registered, a result a more likely.

At Delhi (Karnail Singh Stadium): Himachal Pradesh recovered well after losing 4 for 92. Nikhil Gangta led the resurgence with his unbeaten 89, while Ankush Bains departed for 68 at fag end of the day. The scorecard reads 273 for 5.

Left-arm orthodox spinner Vikas Yadav took three wickets. Prashant Chopra (55) was the only one in the top four to survive Yadav. The match, by all means, is evenly poised. However, if Services concede over 400, Himachal Pradesh will then have the upper hand.

At Nagpur: Vidarbha lost the plot despite restricting Chhattisgarh to 19 for 2. All the same, Ashutosh Singh and Amandeep Khare sucked all the momentum from the opposition and propelled the score to 246 for 3. Khare remained unbeaten on 116 while Umesh Yadav dismissed Ashutosh for 113. For that matter, Umesh was the only wicket-taker, ending the day with figures of 3 for 44.

Both Services and Punjab have lost a match each, tottering at the bottom of the table. 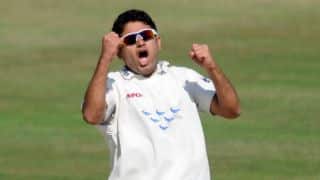