Gujarat hammered Jammu and Kashmir by an innings and 64 runs on Day Three of Round Three of the Ranji Trophy 2017-18.

At Surat: Things got merrier for depending champions Gujarat in Group B of the 2017-18 Ranji Trophy. Gujarat hammered Jammu & Kashmir by an innings and 64 runs on Day Three of Round Three. Jammu & Kashmir elected to bat first, but were bundled for 261 on the opening day, courtesy Piyush Chawla s five-for. Gujarat batted till Day Three and finished on a challenging 455, courtesy Manprit Juneja s 131. J&K did not stand a chance against the Gujarat bowlers. They were bundled for 130 by Day three as Hardik Patel took 5 wickets and Chawla another 4.

At Thiruvananthapuram: In another match of the group, Kerala continued to maintain their domination over Rajasthan. Had the third session not been abandoned due to bad light, Kerala could have moved closer to victory. Kerala posted a decent 335, courtesy Rohan Prem s 86 and Jalaj Saxena s 79. In reply, Rajasthan were bowled out for 243, Saxena taking 8 for 86. Kerala are currently 217 for 2. The innings was dominated by no prize for guessing Saxena. He remained unbeaten on 102 and Sanju Samson on 72.

At Ranchi: The third game of the group between Jharkhand and Haryana was interrupted by bad light as well. However, there was still some play possible in the third session. Haryana are currently trailing by 76 runs. They had been bundled for mere 208 on Day One, courtesy Sunny Gupta s 4 for 67. Ishank Jaggi (135) led the charge for Jharkhand, who declared with a 217-run lead. Haryana are currently 141 for 4. Jharkhand should wrap things up early tomorrow unless something spectacular happens. 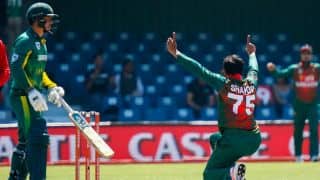