Bengal's Abhishek Raman played a stellar innings as it was his 176 as they reached 306 for the loss of five wickets against Himachal Pradesh.

At Raipur: Punjab‘s Manpreet Gony and Vinay Choudhary claimed four and three wickets respectively as Chattisgarh were bundled for 238 on Day One of Round Four of the Ranji Trophy 2017-18 at the Shaheed Veer Narayan Singh International Stadium in Raipur on Wednesday. Winning the toss and electing to bat, Chattisgarh were going strong, but started to lose wickets at regular intervals. Jatin Saxena, Sumit Ruikar and Vishal Singh scored half-century each. As for Now, Punjab are 40 for the loss of a wicket, with Jiwanjot Singh batting unbeaten on 40, while Manan Vohra is the only man to be dismissed for four.

At Nagpur: In what was a slow day at Nagpur, it was Vidarbha‘s Faiz Fazal, who played a healthy knock of 128, as they finished on 259 for the loss of three wickets against Services, on Day One of Round Four of the Ranji Trophy 2017-18 at the Vidarbha Cricket Association Ground in Nagpur on Wednesday. Winning the toss and electing to bat, opener Fazal continued his domination over the bowlers, while fellow opener Sanjay Ramaswamy played a subtle knock of 55. Services’s Khalid Ahmad Zahid was the star of their bowling attack, claiming a couple for 62. Ranji Trophy 2017-18, Round 4, Day 1: Cheteshwar Pujara shines for Saurashtra, Kerala and Gujarat stumble in Group B 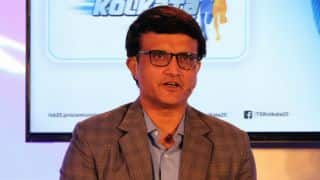