Karnataka put up dominating performance as they played Maharashtra on Day One of Round 4of Ranji Trophy 2017-18. At the Maharashtra Cricket Association Stadium, Pune, Karnataka won the toss and elected to bowl. They restricted Maharashtra at 245 despite a brilliant century knock from Rahul Tripathi and a 69-run effort from Naushad Shaikh. Only four batsmen could touch the second-digit mark including these two as Karnataka skipper Vinay Kumar ran through their batting line up. Vinay picked up 6 for 59 and was Karnataka s best bowler.

Hyderabad s top order outwitted the Railways bowlers, putting up 272 for 3 at stumps of Day One of Round 4 of Ranji Trophy 2017-18. At the Karnail Singh Stadium, Delhi, Railways chose to bowl. Tanmay Agarwal and Aksath Reddy provided Hyderabad with a strong start. Agarwal was removed for 41 while Reddy completed his half century. No. 3 Kolla Sumanth was the only batsman to depart for a single digit score. Bavanaka Sandeep built a strong partnership with skipper Ambati Rayudu before stumps. Both completed their half-centuries and remained unbeaten.

Manish Rao was Railways best bowler for the day with a couple of wickets while Karan Thakur was the only other guy to have picked up a wicket.

Delhi bowlers ruled the opening day as they brough Uttar Pradesh down collectively during Round 4 match of Ranji Trophy 2017-18. At Palam A Stadium, Delhi put Uttar Pradesh to bat. Apart from three of their batsmen, others failed as Delhi reduced them to 270 for 8. Uttar Pradesh kept losing wickets regularly until Mohammad Saif and Akshdeep Nath formed a partnership. Later Upendra Yadav scored a handy 48 and remained unbeaten.

Ishant Sharma and Navdeep Saini were the pick of the bowlers with a couple of wickets each. 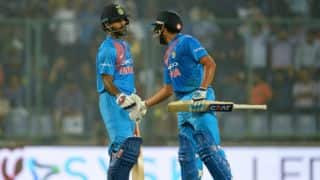