Round 4 of Ranji Trophy 2017-18 started and stars featuring in the edition put up mixed performances. Cheteshwar Pujara, Ravindra Jadeja, Ambati Rayudu, Ajinkya Rahane and Manoj Tiwary were impressive while Wriddhiman Saha, Parthiv Patel and Suresh Raina disappointed with their performances.

Though Robin Uthappa failed to play a big knock, falling for 13, Cheteshwar Pujara and Ravindra Jadeja played well to help Saurashtra reach 341 for 5 at stumps. Pujara remained unbeaten at 125 while Jadeja scored 42.

For Bengal, Wriddhiman Saha got out for 2. Manoj Tiwary, on the other hand, remained unbeaten for 78 to take Bengal to 306 for 5.

Ambati Rayudu, the captain of Hyderabad, led his side from front, scoring an unbeaten 88 in his team s 272 for 3.

Suresh Raina failed yet again in this series, getting out for 10. Uttar Pradesh were restricted at 270 for 8 at stumps of Day One. Ishant Sharma picked up 2 wickets in the match for Delhi.

Sanju Samson s 112 was a lone effort as Kerala s innings came to an end for 219. Parvez Rasool picked up 6 wickets for Jammu and Kashmir in the match.

Parthiv Patel disappointed with a 4 as Gujarat were bowled out for 236. Piyush Chawla s 36 was a handy contribution in the innings.

Naman Ojha failed to impress as he contributed with 24 runs in Madhya Pradesh s 219 for 5.

Mumbai s Prithvi Shaw added another feather to his hat, scoring the third hundred of this First Class season and the fourth of his career. He is now only behind Sachin Tendulkar in the list of No. Of hundreds scored before the age of 18. His teammate and India player Ajinkya Rahane was unlucky to get out for 49, missing on his half-century. 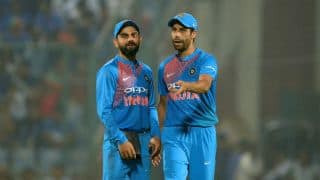 India vs New Zealand, 1st T20I: Shikhar Dhawan believes he has ability to excel across formats