Skipper Manoj Tiwary led from the front for Bengal to be in the driver's seat on Day Two.

At Kolkata: Abhishek Raman laid the platform for Bengal s big score on Day One with a scintillating 176-run knock. On Thursday, skipper Manoj Tiwary stole the show with a composed 123. He was supported by Shreevats Goswami before Mohammed Shami went bonkers down the order. Bengal eventually reached 419.

In reply, Himachal are tottering at 163 for 5. Priyanshu Khanduri and Sumeet Verma got scored fifties, but Himachal lost wickets at regular intervals. Ashok Dinda and Shami took 2 wickets apiece to dent Himachal s progress. A tough day is in store for Himachal.

At Raipur: Hosts Chhattisgarh are on the back foot against Punjab. After being dismissed for 238, Chhattisgarh bowlers had no response to Anmolpreet Singh and Gurkeerat Singh Mann. Both men got hundreds with a strike rates in excess of 90. Opener Jiwanjot Singh s 75 added to Chhattisgarh s miseries. As a result, Punjab lead by a whopping 243 runs, and will like to dictate terms tomorrow.

At Nagpur: Vidarbha lead Services by 244 runs at stumps. Resuming at 259 for 3, Faiz Fazal fell early. He added only 8 runs to his overnight score of 128. The bulk of work was carried from Ganesh Satish, who was supported by a stubborn lower-order. Vidarbha folded for a competitive 385.

Services clawed their way back after reducing Vidarbha from 282 for 4 to 385. However, they have lost wickets at regular junctures to be reeling at 141 for 4. They trail by 244 and need a big innings from set batsman Rahul Singh. 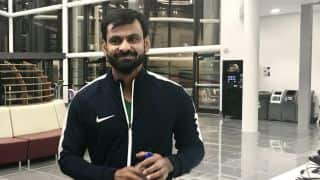 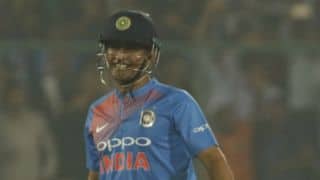 MS Dhoni good enough to bat at any position from 3 to 7, feels Adam Gilchrist