Nair got out soon after getting to his century while Agarwal carried his bat, remaining unbeaten at 304 as the skipper announced the innings with a 383-run lead.

With 6 wickets in hand, Maharashtra trail by 248 runs against Karnataka at stumps of Day Three of Round 4 of Ranji Trophy 2017-18. Earlier, Mayank Agarwal s unbeaten 304 took Karnataka to a gigantic 628 for 5 decl. Abhimanyu Mithun ran through the top order to reduce it to 135 for 4.

Agarwal, who was unbeaten along with Karun Nair at stumps of Day Two, built a big partnership on Day Three. Nair got out soon after getting to his century while Agarwal carried his bat, remaining unbeaten at 304 as the skipper announced the innings with a 383-run lead. Chirag Khurana was the best bowler for Maharashtra with 3 for 147. For Karnataka, Mithun bagged a couple of wickets. Ruturaj Gaikwad was unbeaten at 61 at stumps and will try to convert it to a bigger score the next day.

Hyderabad aim to bowl out Hyderabad as they have a 215-run lead against Railways in Round 4 of Ranji Trophy 2017-18. Hyderabad had put up a 474 for 9 declared in their first innings and then went on to bowl Railways out for 246. They imposed follow on, going for the win, aiming to secure 7 points.

After opener Saurabh Wakaskar departed early, Shivakant Shukla and Nitin Bhille put up a strong partnership that brought Railways close to hundred. Both missed on their half-centuries and the team struggled to find another partnership in the innings. Manish Rao and Anureet Singh in lower order came to the team s rescue as the middle order failed.

Telukupalli Ravi Teja was the best of the bowlers with his 5-for while Mehdi Hasan and Akash Bhandari got 2 wickets each.

At stumps, Railways put up 13 without loss.

Delhi and Uttar Pradesh give close fight for their win in Round 4 of Ranji Trophy 2017-18. It has been a close fight so far, with Delhi bowling out Uttar Pradesh for 290 and then Uttar Pradesh restricting Delhi at 269. UP took the first-innings lead and batted again, putting up 224 for 7 at stumps of Day Three.

Delhi lost their 3 wicket early in the morning, adding just 41 runs. While Gambhir had played a crucial knock of 86, Dhruv Shorey remained unbeaten at 98. Saurabh Kumar (4 for 87) and Imtiaz Ahmed (3 for 33) were the best bowlers.

Ishant Sharma later led Delhi s bowling to reduce UP to 224 for 7. Ashdeep Nath was the lone warrior and remained unbeaten at 110. His only support came from Rinku Singh who added 64. Suresh Raina failed again, scoring 16 runs only. Ishant bagged a 3-for. 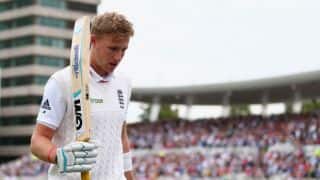