Ranji Trophy 2017-18: Bengal and Punjab are favourites to win their respective ties on Day 4.

At Kolkata: Resuming at 163 for 5, Himachal were in total disarray at the start of Day Three. Bengal bundled them out for 206 courtesy Ashok Dinda’s 5-for, Mohammed Shami and Mukesh Kumar’s contributions. Nonetheless, the twist in the tale came in the resistance shown from Himachal openers following-on.

At stumps, they have lost only 2 wickets for 207. A 125-run opening stand between Prashant Chopra and Priyanshu Khaduri, initiated the fightback but they still have a long way to go. Himachal trail by 6 runs.

At Raipur: Trailing by 243 runs, Chhattisgarh looked to fold Punjab’s innings quickly in the morning session. However, Punjab continued to pile up runs and amassed 653 for 9 decl. After hundreds from Anmolpreet Singh and Gurkeerat Singh Mann, the lower order chipped in with brief stands. Vinay Chowdhary, Abhishek Sharma, Abhishek Gupta and Barinder Sran got starts to push the overall lead to 415 runs.

In reply, only Ashutosh Singh’s unbeaten 81 impressed for Chhattisgarh. They are tottering at 171 for 4 courtesy Sandeep Sharma and Sran. They trail by 244 runs, and require a humongous effort to save the match.

At Nagpur: In reply to Vidarbha’s 385, Services fought hard before folding for 317. Nakul Verma and Vikas Yadav’s fifties took the scoreboard forward after Rahul Singh’s 63. At one stage, they were 289 for 8, but the last two wickets pushed the score over 300.

Nonetheless, it is advantage Vidarbha. With a lead of 68 runs, they have added 111 for 2 in the second innings. Faiz Fazal and Wasim Jaffer fell after getting a start. It will be interesting to see Vidarbha’s approach on the final day. Will they look to accelerate and set a target for Services? 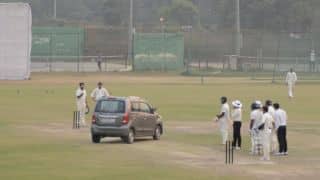 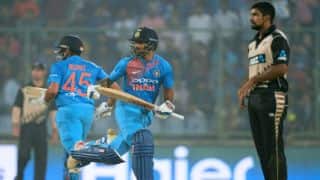