At Porvorim: Sanjay Ramaswamy and Wasim Jaffer helped Vidarbha gain momentum in their Round 6 tie against Goa in Ranji Trophy 2017-18. Visitor Vidarbha are 40 short of gaining crucial first-innings lead.

Ramaswamy and Jaffer added 117 runs for the second wicket. Skipper Faiz Fazal made a 49-ball 32 at the top. While Ramaswamy fell for 87 to Darshan Misal, Jaffer is unbeaten on 70 at stumps.

At Amritsar: Abhimanyu Easwaran and Abhishek Raman s centuries took Bengal to a commanding position at close of Day 2, Round 6. After bundling out Punjab for 147, Bengal added further misery.

The openers built a mammoth 222-run stand for the opening wicket. However, Raman continued his top-notch form and is one shy from 150. In between, Punjab had their moments. A mix-up between Easwaran and Manoj Tiwary cost Bengal the wicket of the captain. Sudip Chatterjee, too, was trapped by Kaul for 4. However, Shreevats Goswami provided support to Raman and remained unbeaten on 29, stretching Bengal s lead to 162.

At Raipur: Services piled on runs and took crucial first-innings lead of 142 runs on Day 2 of Group D clash against Chhattisgarh. Services saw performances from every batsmen. Their openers, who remained unbeaten on 39 until Day 1, were unable to continue the momentum on Day 2.

However, Vikas Hathwala s handy 84-ball 76 set the tone for them. He also received support from the remaining middle-order batsmen to take their score beyond the 200-run mark. Services managed to take their lead to triple digits with the help of Diwesh Pathania s cameo of 30-ball 33. Chhattisgarh s Shahnawaz Hussain shone with a five-wicket haul.

The hosts, who were bundled out for 130 on Day One, were 24 for no loss at close. However, they suffered setback when opener Rishabh Tiwari was retired hurt on 1. They need to cover a deficit of 118 runs on Day 3. 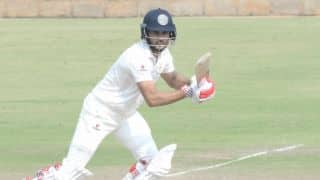