Bengal trumped Punjab by an innings and 19 runs.

At Raipur: Services gained an emphatic win over Chhattisgarh in Round 6 of Ranji Trophy 2017-18, Day 3. Playing at home, Chhattisgarh had been bundled out for 130 in their first innings. They had a near-similar outing in the second innings in reply to Services 272; it was nowhere close to enough.

Diwesh Pathania claimed seven Chhattisgarh wickets to pull off an innings-and-9-run victory for Services. Pal Raj Bahadur picked 3 for 35. Pathania was adjured Man of the Match for match figures of 9 for 86. For Chhattisgarh, Abhimanyu Chauhan and Rishabh Tiwari got 78 between themselves.

Man of the Match: Diwesh Pathania.

At Amritsar: Bengal were boosted with a bonus point after trumping Punjab by an innings and 19 runs. They are now placed behind Vidarbha in the Group D points table, who are also on the brink of victory against Goa.

Starting the day with an overnight score of 309 for 3, opener Abhishek Raman and Shreevats Goswami went on to add another 70 before Bengal declared with a 132-run lead. For Punjab, only Siddarth Kaul emerged as the pick of bowlers with his fifer.

Up against a deficit of 232, Punjab were off to a decent start with their openers adding 38 runs. Anmolpreet Singh has been producing runs for Punjab in recent times; he looked in good stead here as well, with 40. This was followed by Gurkeerat Singh Mann s fifty. Unfortunately, a collapse followed, and Punjab were bundled out for 213.

Ishan Porel starred with a 5 wickets while Pradipta Pramanik and Boddupalli Amit shared another 4, handing Bengal their second win in this season.

Man of the Match: Abhishek Raman.

At Porvorim: Wasim Jaffer s unbeaten 158 handed Vidarbha a first-innings lead over Goa as they declared on 427 on Day 3. Jaffer, who refuses to age, built crucial partnerships of 117 with Sanjay Ramaswamy and 87 with Shalabh Shrivastava.

Ganesh Satish (101*) then joined Jaffer. The duo added 171 for fourth wicket before declaring. Batting 188 behind, Goa slumped to 19 for 2 losing openers. 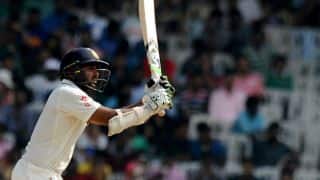 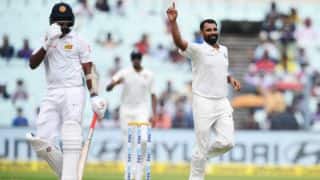