While Rajasthan and Jammu & Kashmir piled on the runs, the other matches of Group B were dominated by bowlers.

Haryana trail by 78 runs with 4 wickets remaining in the second innings. Chaitanya Bishnoi, batting at No. 3, remained unbeaten on 53 while others failed to survive in tough batting conditions.

Saurashtra were bundled out for 278. Riding on Prerak Mankad and Sheldon Jackson s fifties, Saurashtra managed a competitive score. Ashish Hooda ended with a stunning six-wicket haul on the opening day.

Haryana then were skittled out for a mere 107 runs in 42.3 overs. It took only three Saurashtra bowlers to fold Haryana s innings.

The same followed in the second innings when Saurashtra enforced follow-on. Another 4 wickets, and they will be on the doorstep of victory.

If Saxena helps Kerala take a lead over 100 runs on Day Three, the game may as well be over for Jharkhand. Kerala s new coach Dav Whatmore will be happy with his team s progress.

After Rajasthan registered 330, Jammu & Kashmir comfortably ended Day Two at 150 for 1. Openers Ahmed Bandy and Shubham Khajuria added 109 for the first wicket. Although Khujaria departed as soon as he reached fifty, Bandy continued his good work and remained unbeaten on 72. TM Ul-Haq was the only wicket-taker.

On the opening day of Ranji Trophy 2017-18, Robin Bist had scored a resolute hundred and taken his team to 330 all-out. Mohammad Mudhasir concluded with a five-for. 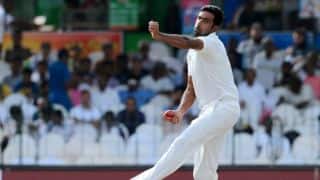 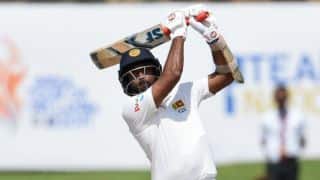