Shah's scintillating 165 off 274 balls was studded with 23 boundaries and three sixes.

Captain Jaydev Shah scored his first century of the Ranji Trophy 2018-19 season his 10th overall to power Saurashtra to 521 on day two of their Elite A match at the SCA stadium in Rajkot on Thursday.

Resuming their overnight score at 266/6 after Arpit Vasavada s 120, Shah, overnight on 22, found good support from Dharmendrasinh Jadeja, overnight on 10, as the duo were involved in a staggering 178-run partnership for the seventh wicket.

Jadeja smashed nine boundaries to reach 87 off 204 deliveries before the partnership was broken by Bhargav Bhatt, who had Jadeja caught by Kedar Devdhar.

Bhatt claimed his second wicket four overs later to send Yuvraj Chudasama for just three. However, Shah batted with the tail, with Chetan Sakariya (25 off 60) offering good support, for his scintillating 165 off 274 balls, his innings studded with 23 boundaries and three sixes. Shah s fine innings was brought to an end by fast bowler Babashafi Pathan.

Atit Sheth claimed the last wicket, his third of the innings, in Sakariya as Saurashtra ended their first innings at 521. In reply, Baroda were 10/0 with openers Devdhar and Aditya Waghmode on 8 and 1 respectively. 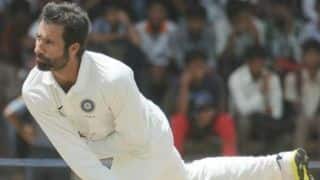