Fifties to Priyam Garg and skipper Akshdeep Nath carried UP towards a five-run lead over Services at Palam.

Uttar Pradesh have secured a lead of five runs over Services  in their Group C round three 2018-19 Ranji Trophy match at Palam, thanks largely to fifties to Priyam Garg and skipper Akshdeep Nath. The home team will be glad to have dismissed Suresh Raina  for 41, however, one of Diwesh Pathania’s three wickets on another slow-moving day.

Group C leaders UP took the last two wickets needed  for the addition of four runs to Services’ total, with Ankit Rajpoot and Shivam Mavi taking one each to end with 4/74 and 4/44 respectively.

Madhav Kaushik (21) and Mohammad Saif (33) got starts before being dismissed, but Garg (88) and Nath (56) put on 93 for the third wicket to rally UP. Pathania dismissed Garg and Raina to be Services’ most successful bowler with 3/64.

Raina was out in the 83rd over of UP’s first innings, and by stumps Rinku Singh had gotten them into a lead of five runs at 265/5. 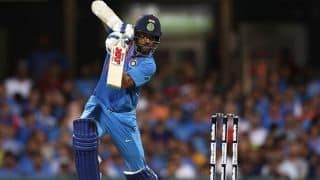 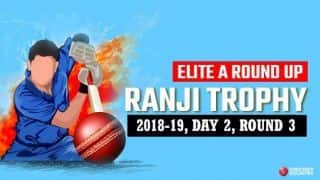