Tripura seized control against Goa on the second day thanks to handy contributions from their lower order and early strikes from their pace duo of Ajoy Sarkar and Harmeet Singh.

Tripura seized control against Goa on the second day thanks to handy contributions from their lower order and early strikes from their pace duo of Ajoy Sarkar and Harmeet Singh at the Police Training Academy Ground, Agartala.

On Saturday, in their Ranji Trophy round 6 fixture, after being bowled out for 358 in the first innings, the hosts had reduced Goa to 107/4 who were trailing by 251 runs at the close of play.

Tripura had finished the opening day at 247/7 after a recovery led by the pair of Pratyush Singh and Harmeet for the seventh wicket.

Pratyush was the key to their recovery and he deservedly completed a century, his maiden in first-class cricket. He fell on 110 and Goa would have heaved a sigh of relief having let the advantage slip from there hands.

But there was no respite with the tail putting up a stiff resistance. No. 9 batsman Rajib Saha (68*) went on to score an unbeaten half-century and struck decent partnerships with Ajoy Sarkar (14) and Abhijit Sarkar to push the score 358- all out in 115.4 overs. From 128/6 at one stage, it was a terrific recovery.

The bowlers extended the good work of their batsmen after Ajoy got rid of opener Rajashekhar Harikant (4) and captain Sagun Kamat in successive overs. Harmeet then pinned Amit Verma in front on 7 and ended Sumiran Amonkar’s resistance on 22 off 110 to leave them 54/4 in 33.2 overs.

Snehal Suhas Kauthankar and Suyash Prabhudessai got together to arrest the slide and take the score past the 100-run mark without further damage. At stumps, Kauthankar had scored 41* while Prabhudessai was batting on 21 in an unbroken stand of 53 runs. 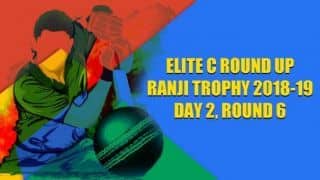 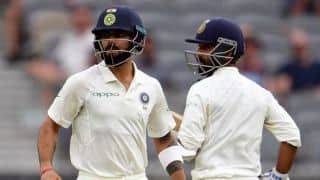